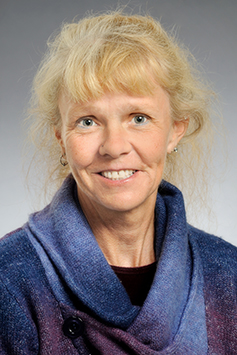 Dr. Dorothy Lane completed her Ph.D. in English, specializing in postcolonial literature, at Queen’s University in 1992. She has taught English at Luther College at the University of Regina since 1993 as well as in the Interdisciplinary Studies Program from 1997-2002. She has served in a number of administrative positions, including Chair of the University’s Faculty Association (2005-2008) and head of the University’s English department (2008-2011). Dr. Lane has published and presented locally and internationally on a wide variety of topics, including pedagogical initiatives and travel narratives; her most recent research focuses on pilgrimage narratives related to South Asia. She teaches senior-level courses in Canadian, postcolonial, and children’s literature; she has supervised both senior undergraduate and graduate students, and has served on dissertation committees for two doctoral students in Education. She is an active member of St. Paul’s (Anglican) Cathedral in Regina, Saskatchewan.

“‘Dominion from Sea to Sea’: Christianity, Imperialism, and the Trope of Conversion.” A Sea for Encounters: Essays Towards a Postcolonial Commonwealth. Ed. Stella Borg-Barthet. Amsterdam: Rodopi, 2009. 177-191.

"To Our Remotest Border’: Christianity and Empire in Canadian Writing.” Spirit of Place: Source of the Sacred?  Ed. Griffith and Tulip. Sydney: Centre for Religion, Literature and the Arts, 1999. 262-274.