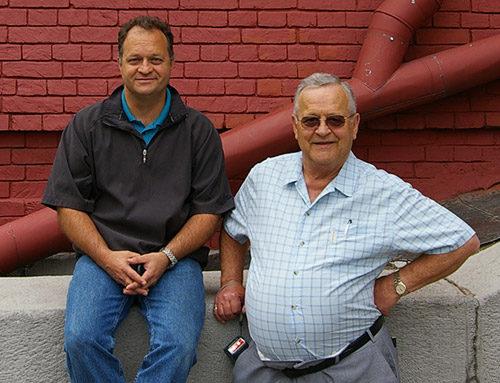 Walter Posehn (HS’51, HSU’52) grew up near Kronau, Saskatchewan during the Depression and war times.  When he came to Luther in the fall of 1947, Walter recognised his good fortune. Not everyone his age enjoyed the privilege of pursuing academics. This realisation and his Luther experience influenced Walter throughout his life and likely inspired his philanthropic nature.

After completing his first year of university at Luther in 1952, Walter attended the University of Regina to become a chemical engineer. For the next twenty-two years, he worked across Canada in Regina, Calgary, Fort St John, and British Columbia as well as working abroad in Riyadh, Saudi Arabia. In 1978, he left the oil business to become a full-time farmer, taking over his wife Jean’s family farm near Lorlie, Saskatchewan. This gave him the opportunity to care for Jean, who dealt with health issues in her later years until she passed away in 2003.

Walter’s spirit of caring and thoughtful ways of planning for the future extended to Luther. For many years he loyally supported the College. In later times, Walter created a charitable remainder trust to benefit Luther.

A charitable remainder trust is an arrangement where a donor places a sum of money into an irrevocable trust. While the donor is alive, any income from the trust is typically paid to the donor. After the donor’s death, the money or assets left in the trust are transferred to the registered charity appointed by the donor.

When Walter passed away in 2010, all the funds in his charitable trust came to Luther College. With the blessing of his family, Walter’s gift provided an important boost to our A Time to Build project.

Gregory Posehn (HS’78) has followed in his father’s footsteps. When his parents decided to move to Saudi Arabia in 1976, Greg had just completed grade 10 in Calgary, Alberta. The family had to decide where Greg would finish the last two years of high school. They considered a number of options, including Switzerland and London UK but in the end it seemed only natural that Greg enrol at Luther College High School in Regina, Saskatchewan.

Living at Luther opened Greg’s eyes to what was going on in the world outside of his own experience.   Luther became a home for him, providing comfort and security as well as intellectual stimulation. Greg recalls fond memories of fun with fellow students and the daily filing into chapel as well as his weekly laundry routine and coffee hang-out at the Paddock with fellow dormers. The annual musical productions nurtured his lifelong appreciation for music.

Greg appreciates the valuable experiences he had at Luther, such as learning how to interact with other students from varying backgrounds. He credits Luther with preparing him to work with, understand and successfully relate to others.

After graduating from Luther in 1978, Greg attended the University of Saskatchewan where he studied Finance and Economics. After receiving a Bachelor of Arts, he continued his studies and obtained a Master’s degree in Economics as well as an MBA from the College of Commerce. Today Greg works as a portfolio manager with CIBC.

Greg also carries on his father’s legacy of valuing community and like Walter, has made careful philanthropic plans. Motivated largely by his father, Greg established the Posehn Foundation in 2006 through the Investors Group. Since then, the Foundation helped to create and fund the Posehn Choral Leadership Award at the High School (see inset) and provide support for the A Time to Build campaign.

Greg is a modest, unassuming nice guy.  Those who knew his father would say that Walter demonstrated the same characteristics before leaving his mortal coil.  Both are legacy champions, whose plans shape the lives of many Luther students – past, present and future.