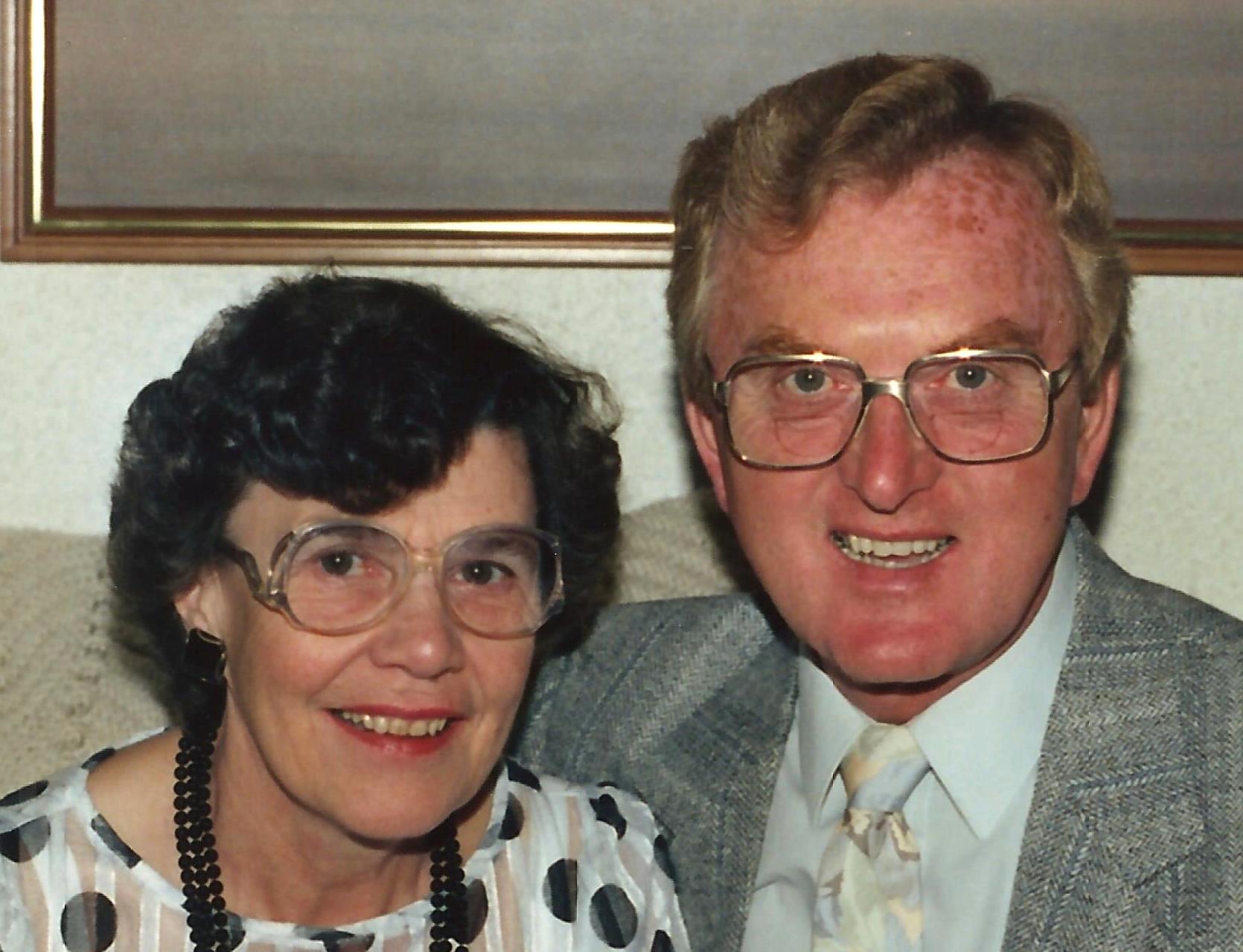 Reinhold and Ella Sommerfeld gave a lifetime of dedicated service to Luther College. They both made a tremendous impact on the Luther community – their labours of love helped Luther evolve into the vital institution it is today. They shared a deep love for family and constantly lived out their values of personal integrity, deep faith and passionate work ethic.

Reinhold, better known as Rein, spent most of his growing years in North Battleford after emigrating from Poland in 1928 at the age of three with his parents, Adolf and Wanda Sommerfeld. Ella grew up in Lemberg, the daughter of Wilhelm and Olga Wutke, who had emigrated from Poland in 1926. Rein apparently followed his mother’s directives about choosing a girl who was virtuous, a thrifty homemaker and resourceful. He married Ella Wutke on May 13, 1950. They had three children: Eric (HS’70, U’79), Ralph (HS’73, U’78) and Ruth (HS’74).

An accounting course had brought Rein to Regina in the fall of 1947. He joined Luther College in 1950, the day after New Year’s. Rein's financial acumen and dedication led him through a rewarding thirty-eight-year career. Luther life became interwoven with family life, as the Sommerfelds frequently invited Luther staff and faculty into their home for fellowship and hearty food. Everyone felt at home with the Sommerfelds, who welcomed each guest with warmth and genuine hospitality.

The melding of family and community lives increased when Ella started working at Luther, at first on a part-time basis, and later as a full-time assistant. Ella had trained in secretarial work and she agreed to help out in the “front office.” While providing occasional secretarial support to President Morris Anderson, her main contribution was in building alumni relations. She was a tremendous help to Don King, Luther’s first Development Director, by researching alumni. She had a way of speaking on the phone that put people right at ease.

Ella’s memory was fantastic – she easily recognized names of Luther alumni mentioned in newspaper articles. Her warm-hearted rapport with people, efficient competence and persistent efforts at establishing connections helped Luther forge good relationships with students and alumni alike. Her work helped lay a firm foundation for successful fundraising for the College. She even got the children involved – son Eric remembers all the Sommerfeld kids being recruited to help stuff envelopes on more than one occasion!

As for Rein, he was a remarkably good steward. His ability to make the best use of scarce resources meant that he was extremely helpful to the President, the school administration and the Board of Regents. As the College’s Treasurer and later as Business Manager at the university campus, he governed financial resources with great care. Having a no-nonsense attitude and down-to-earth outlook served him and Luther very well.

Morris Anderson, Luther’s President for the majority of Rein’s time at Luther, gives him high praise: “I depended on his expertise and competence. He was a facilitator, good at connecting with alumni. Rein had outstanding communication and people skills. He was totally dedicated to the College and its mission. He was efficient, well-organized and completely dependable. He was a key player in moving the university program to the University campus. He had sound judgment, especially in financial matters. He was well respected.”

Rein had a great love of history and he acted as Luther’s unofficial archivist. His instinct was to preserve things so they wouldn’t get lost. He kept all kinds of memorabilia. This turned out to be a great help to Dr. Richard Hordern when he conducted research for his recent book, The Luther College Story, 1913-2013: A Century of Faithfulness in Education.

Unfailingly kind and respectful, and unflinchingly dedicated to Luther’s best interests, Rein approached his work with relish and dedication. Upon his retirement in 1988, his positive contributions to Luther over the years were viewed as truly remarkable.

Ella and Rein’s love for Luther did not end with their retirement. They continued to support Luther with regular donations and no doubt with their prayers, even after moving to British Columbia in 1994. Ella passed away in 1996.

Rein enjoyed a number of talents and interests throughout his life. A self-taught musician, he played the organ for Sunday services in North Battleford and later at services, weddings and funerals for twenty-three years at Christ Lutheran Church in Regina. He was also choir director and Bible study teacher. His love of history accompanied him whenever he travelled. He compiled a family history in 1982 called The Sommerfeld Saga.

After Ella’s passing Rein and two of his brothers visited many of their relatives in a unified Germany in 1998. Here Rein continued his thirty-year research into his family roots with more personal interviews. He continued to travel to Poland, Russia, Scandinavia and the Czech Republic in 2000. He returned to his birthplace of Swiniokerz, Poland, via Germany and Kenya in 2001. In 2005, Rein published a second edition of his family saga.

In September 2013 Rein passed away, prepared for the journey ahead and confident in his faith. Luther recently received news that Rein and Ella had decided many years ago to continue to support the College through a planned gift, and Rein dedicated a portion of his RRIF to Luther College. Both of them had contributed to the fund, and now both of them are giving back to their beloved Luther College.

Such generosity is inspiring and humbling. To those who knew Ella and Rein, who observed their dedication to Luther in their everyday lives and work, such generosity comes as no surprise. Their children, Eric, Ralph and Ruth, support Rein’s wishes for this gift and hope it will inspire others to think about their own legacy. May we remember well Rein and Ella for their kind, gentle and respectful service. May their legacy of labouring with love continue to inspire us for many generations to come.