Shawn Fraser and Nichole Huck fell in love at Luther College at the University of Regina. They were good friends the first year and have fond memories of making tea and popcorn in the kitchenette in the residence basement and studying for Logic 100 together. “It was like a little home. Now, it feels like foreshadowing,” Huck says. 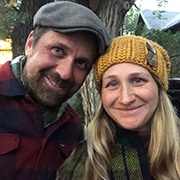 Both Fraser and Huck are from small towns and lived in Luther residence. Fraser’s older brother and sister had also gone to Luther and he was always excited to visit them. “It was an interesting place with a fun atmosphere. It was an obvious choice for me to go there,” he says.

Huck is a big fan of living in residence. “I think about how formative the first few years of university were and how much of that was shaped by people I met at residence.” A bonus was that when she was on the larger U of R campus, she never felt alone. “You could walk down the halls at the university, and you were always seeing people you knew, because you knew hundreds of people.”

Fraser notes that while Regina folks are very friendly, it can be difficult to break into established social circles when you first arrive. “At Luther, people are hungry to make a new social circle. There’s an advantage when you come from away, because a week into school, you know all new people,” he says. Fraser made lifelong friends at Luther and regularly runs into people from his time there.

Residence also taught Fraser and Huck to get along with people from different backgrounds, interests, and political stripes. Huck started a culture club that met in the cafeteria on Sunday evenings to talk about current affairs. “It’s easy to be friends with people you agree with already. But at Luther, you’re put together with different people, and you’re forced to learn to get along and appreciate others,” she says.

Another fond memory is eating lunch in the Luther Cafeteria. “Shawn and I love meeting new people. We would say, ‘Who are we going to sit with today?’ It was fun for us at every meal to sit down with a bunch of other people—it could be a 40-year-old student from Iran or a group of international students from China. We learned about different people at every meal,” Huck says.

While Huck registered through Campion College, she attended as many classes as she could at Luther, appreciating the small class sizes and the opportunity to get to know professors and students better. “You’re not just a nameless person in a class of hundreds,” she notes. The couple got to know the Luther chaplain, Cheryl Toth, quite well, and she was the officiant for their wedding in 2009. They continue to keep in close contact today.

Fraser and Huck explored their commitment to social activism in their degrees. Fraser served as Vice-President of Student Affairs with the University of Regina Students’ Union and convocated with a political science degree in 2007, after spending a year in Indonesia with Canada World Youth. Throughout her bachelor of arts in journalism degree, Huck explored the Karen conflict in Myanmar (then Burma), the world’s longest ongoing civil war. Upon convocating in 2005, Huck received a travelling scholarship to Thailand and reported on the conflict from there. Once Fraser finished his degree, the pair moved to Ghana for a year for Huck’s job at a radio station with Journalists for Human Rights.

Since university, Fraser has built his career in Regina in human services. He has served as the Executive Director of Carmichael Outreach, as a city councillor, at the YMCA working on Regina’s plan to end homelessness, and currently as the Executive Director for the John Howard Society. “I have always been drawn to working with people and jobs that are dynamic, with something new and fresh every day,” he says.

That’s the same reason Huck was drawn to journalism: “Every day is something completely different, depending on what’s happening in the world, so that’s exciting.” She has been in a number of roles at CBC Saskatchewan, receiving a Gracie Award and several Radio Television Digital News Association Awards. She is currently on maternity leave from her job, where she is the producer of the noon show Blue Sky and heads CBC’s opinion section.

Huck has taken her fair share of leave, as the couple has four children, ages 10, eight, six, and six months. Looking forward to what their children’s lives will be like, Huck returns to her memories of Luther: “When my kids go to university, I want them to live in residence … I want them to have the same experience that we had. It was so valuable.”