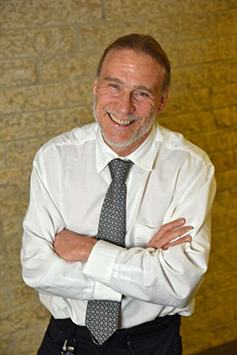 Dr. Franz Volker Greifenhagen studied the Hebrew Bible and Islam at Duke University, graduating with a Ph.D. in 1998. He has taught at Luther College at the University of Regina since 1994 and served the College as Assistant Dean 2005 - 2012, and as Dean 2012 - 2018.

Dr. Greifenhagen collaborates on the national research project "New Muslim public spheres in the digital age: identity, community, diversity and authority in Canada", and has authored or co-authored various articles and academic papers on the Qur’an and Bible, and on modern Islam, including a textbook on the Hebrew Bible, An Introduction to the Hebrew Bible: A Thematic Approach.

Dr. Greifenhagen teaches in Luther College’s Interdisciplinary Studies Program, received an Inspiring Teacher Award, and has supervised both honours and graduate students. He regularly shares his scholarship with church and community groups. Dr. Greifenhagen grew up in Winnipeg, Manitoba. He is married, with two children, a dog, and a cat.

“Muslim Perceptions of Identity, Community, Diversity and Authority in the Internet Age”, 199-213 in Religion and the Internet, ed. Daniel Enstedt, Göran Larsson & Enzo Pace (Annual Review of the Sociology of Religion). Leiden: Brill, 2015.

“‘Little Mosque on the Prairie’ and Modern Convivencia: An Intervention into Canadian Muslim Identities”, 129-146 in Muslims and the New Information and Communication Technologies: Notes from an Emerging and Infinite Field, eds. Thomas Hoffmann & Göran Larsson (Muslims in Global Societies Series 7). Dordrecht: Springer, 2013.

“Covering Up on the Prairies: Perceptions of Muslim Identity, Multiculturalism and Security in Canada” (with A. Brenda Anderson), 55-72 in Islamic Fashion and Anti-Fashion, eds. Emma Tarlo and Annelies Moors. London: Bloomsbury, 2013.

"Qur’an, the Bible in the" (426-427) in the Dictionary of the Bible and Western Culture, eds. Mary Ann Beavis and Michael J. Gilmour. Sheffield: Sheffield Phoenix Press, 2012.

“The Fantastical Muslim: Media and Digital Imaginings and Interventions”.  Presented with A. Brenda Anderson at the Canadian Society for the Study of Religion, Congress of the Humanities and Social Sciences, Calgary, Alberta, May 30, 2016.

“Muslim Digital Spheres in Canada: Framing Research on Transformations of Canadian Muslim Perceptions of Identity, Community, Diversity, and Authority in the Internet Age”. Presented at the Pacific Northwest Regional Meeting of the American Academy of Religion, Calgary, May10, 2014, and at the Canadian Society for the Study of Religion, Congress of the Humanities and Social Sciences, St. Catherines, ON, May 26, 2014.

“Qu’ran and Bible: From Geiger to Reynolds”. Presented at the Canadian Society for the Study of Religion, Congress of the Humanities and Social Sciences, Victoria, BC, June 3, 2013

“Mormons and the Qur’an: The Making of Some Theological, Literary and Historical Connections”. Presented at the Pacific Northwest Regional Meeting of the American Academy of Religion, Seattle, May 3, 2013.

“Veiled threats? Saskatchewan Muslim women on the interaction of gender, Muslim identity and security perceptions” (with Brenda Anderson). Presented at the RESOLVE (Research and Education for Solutions to Violence and Abuse) Research Day, October 19, 2012.

“The Story of Lot/Lūt: Comparative Contemporary Performances of Scripture in Relation to Homosexuality by Christians and Muslims”. Presented at the Pacific Northwest Region Meeting of the American Academy of Religion, Portland, May 12, 2012.

“Towards a Pluralistic Civil Life: Polemics and Irenics”. Presented at the Chester Ronning Centre for the Study of Religion and Public Life (University of Alberta) Symposium on “Religious Perspectives on Civil Life”, Edmonton, March 19, 2011

“Freedom of Inquiry and Vocation as the Lutheran Perspective”, with Bryan Hillis, Pedagogy Series: Pedagogical Approaches as the Federated Colleges, Centre for Teaching and Learning, University of Regina, March 16, 201

“The Theology of the Cross as a Foundation for Muslim-Christian Dialogue” M.Div. (Lutheran Theological Seminary, Saskatoon), (2010).

“The Muslim Identity Crisis: Shari’a as a Mechanism for Decolonization” M.A. (Religious Studies), (2009).

“Sayyid al-Qimni and Hans Küng: A Comparative Study of Power Structure and Resistance in Sunni Islam in Egypt and Catholic Christianity in Europe” M.A. (Religious Studies), (2008).