At the age of eleven, Sarah Bergbusch (HS’13), who describes herself as “fairly reserved,” tried out for a part in her elementary school play – a decision that would help set the trajectory of her future. “I didn’t really understand what acting was at that time, so I just tried my best to become a 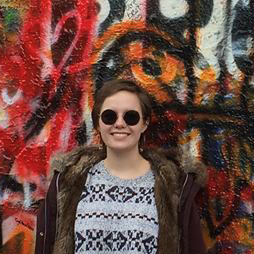 developed character.” To her surprise, “blossoming into a character” not only brought her joy; it also brought a great deal of enjoyment to her audience and, further, provided her with the opportunity to move and connect with that audience. It was the positive reaction from her audience that Sarah says changed her life. “I realized for the first time that I was good at it. Theatre became very important to me after that.”

What helped to develop her natural acting and performance abilities? Why, her years at Luther College High School (LCHS), of course. “Luther had a great drama program,” Sarah recalls. She took advantage of every opportunity to delve into theatre and hone her performance skills throughout her high school days, participating in improv as well as the one act play and musical every year. Playing Yente in Fiddler on the Roof in Grade 11 at LCHS provided her with further confirmation of her ability to transport her audience through her acting. She recalls that after one performance, Mrs. Gail Fry, a teacher at LCHS, came up to her and said, “You were so good up there that I actually believed you were an old woman.”

Sarah soaked up as much knowledge of theatre as she could, taking drama classes offered both at LCHS and outside of high school, including those offered at the Globe Theatre in Regina, Saskatchewan. After graduating in 2013, Sarah continued her performance and improv activities at the Globe Theatre through teaching and performing, participating in the Globe’s Shumiatcher Sandbox Series from 2013-2016 and performing at the Creelman Dinner Theatre. She also became a member of both Combat and Hitchhikers Improv, two improv companies around Regina and went back to her improv roots by sharing her years of experience and acting as an improv coach at LCHS for the Canadian Improv Games: Saskatchewan.

Sarah, who also has a passion for travel, is currently studying in Prague on a one-year exchange program as she pursues a degree in Women’s Studies with a minor in Theatre at the University of Regina. While in Prague, she is taking advantage of the performance culture, which at the moment includes immersion in a puppetry workshop with a company called Puppets in Prague. This is not her first go at puppets. In October 2015, she had the opportunity to work with visual artist and puppeteer Tamara Unroe and the contemporary dance company Fadadance on a show in the Sandbox Series called Wool Gathering. The show combined puppetry, including a lot of shadow puppets, and visual art with dance.

So, what does the future hold for Sarah? In the short term, she is taking part in a program with the Prague Shakespeare Company – a move that she hopes will help to expand her practice with classical theatre. She also plans to participate in a program with the Theatre Academy in Prague that focuses heavily on creation-based theatre and directing. Ultimately, Sarah is really “focused on learning more about theatre” and working on projects that will “expand [her] repertoire to further [her] career.” And she plans to return to her teaching and performance activities at the Globe Theatre in the fall of 2017, following her return from Prague. Her long-term plans don’t look much different: “Future plans and ambitions would be to continue to learn, work, and grow as an artist. [And] maybe more travel.”

Like so many of her fellow alumni, Sarah says that the teachers play a key role in recognizing which interests and particular gifts students bring to the table; helping to draw those natural abilities out and develop them in a meaningful way is where the real magic at Luther happens. Sarah gives special mention to Kris Dueck, LCHS’s Drama teacher and leader of the Improv Club and One-Act Plays, who “was always very encouraging and eager to give students opportunities to act and create,” as well as Deborah Nelson, director of the Girls’ Choir, who “was so kind and caring” and to whom Sarah says she owes her ability to sing. Leaving such a positive impression on one’s student is the “why” for any great teacher, and so many of Luther’s teachers do.

It is not a surprise that of her favourite and most treasured memories of her high school days at LCHS musicals top the list. “The musicals were always very fun,” Sarah recounts, “and the comment ... from Mrs. Fry after my performance as Yente has always stuck with me.” Those few words of acknowledgement are evidence of the encouraging and supportive environment at Luther College, with faculty and staff who recognize, in students just like Sarah, where a gift exists that just needs a little teasing out to ensure it meets its incredible potential.