As COVID-19 variants spike, and countries like Italy go into another lockdown, a recently ordained Catholic priest in Italy who got his start at Luther is urging people to recommit to their faith now more than ever. 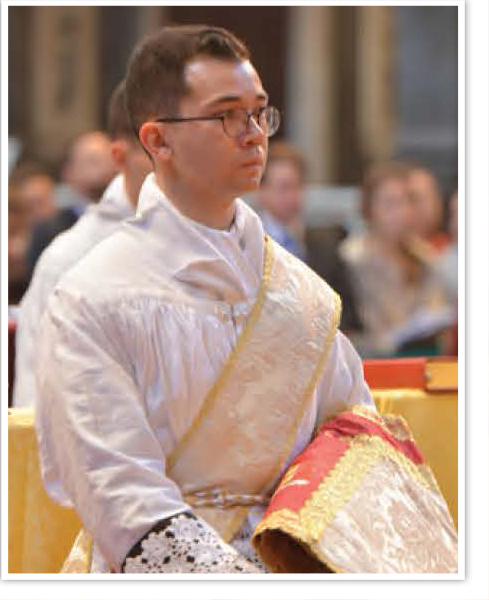 Speaking from his home near the Vatican in Rome, 30-year-old Canon Stephen Sharpe (HS’08) says he’s seeing “a pandemic of loneliness” in the wake of the virus’s deadly path.

“We are isolated from one another, and realizing how fragile our lives really are,” the quiet and introspective cleric begins. “Our old ways are simply not tenable anymore because they’re predicated on unsustainable practices,” he says, referring to rampant materialism and ecological destruction. “When COVID happened, people began realizing that much of what they had built their lives upon was incredibly fragile, and many saw it wiped away overnight. With so much instability, it is important that we ground ourselves in eternal truths, in our faith. Along with COVID, there exists a shadow pandemic of mental illness and, I believe, an even greater pandemic of spiritual illness. As a priest, I feel called upon to go out into the midst of this suffering.”

Canon Sharpe belongs to a French-speaking community of priests called the Institute of Christ the King, headquartered near Florence, Italy. The title “Canon” simply refers to the fact that he lives in community with other priests, abiding to a rule and spirituality that focuses on prayer, chant, and study, while tending to the larger spiritual needs of contemporary society.

“We’ve seen greater isolation, poverty, suffering, and death under COVID, to the point that many wonder how a just God could allow this to happen. But I would argue that when we are challenged the most, we need to turn to our Lord Jesus Christ,” he says thoughtfully. “He alone took on the full burden of human suffering through his death on the cross. When each of us suffers, our Lord is present. Our suffering can be made redemptive by aligning ourselves with the suffering on the cross. Through our faith, hope and love of God, we are united to Christ’s death and resurrection. Having assumed our burdens, Christ rose from the dead, and he calls now saying, ‘Come to me and I will refresh you.’”

Stephen Sharpe grew up in Regina as the shy, only child of a Filipino mother and Caucasian father. He was strongly influenced by his Filipino culture, where family ties are exceedingly important. He was a good student at Luther, but admits he used to “hide under the covers” on Sunday mornings, hoping for a pass from church. “I resisted in so many ways, but my vocation kept gnawing at me. I believe Luther’s culture of excellence, along with my parish priest, the late Father Emmett Morrissey, were pivotal in helping me find my vocation. As I grew, I took the calling to the priesthood more seriously.”

After graduation, he attended Campion College and got an honours degree in Philosophy, and then seriously considered several religious communities in Canada and the United States. He spent a year in St. Louis, Missouri, learning French, and then made the decision to attend the Institute of Christ the King seminary in Florence, Italy. Located on land nestled in the Tuscany region, the seminary has a vineyard and olive garden. Seminarians spend their days in communal meditation, chanting and prayer, while also working the land. The journey to ordination takes seven years.

“When I told my mother I was joining the seminary, she was inconsolable for weeks, and my father, too, because it meant their dream of having grandchildren was now gone,” he reveals. “My superiors told me to pray and let grace work on them. Now they see that they’ve gained this amazing spiritual family from all over the world.”

Canon Sharpe was ordained on July 2, 2020, in a small ceremony under COVID-19 protocols. His only regret was that his parents were unable to travel to be with him. He has since been posted in Rome, five minutes from St. Peter’s Basilica, where he undertakes administrative and secretarial duties, brought into sharp focus under the pandemic.

“Italy has been devastated by COVID, and people everywhere are searching for meaning in their lives,” he says earnestly. “Yet, in the midst of ruins in Rome and elsewhere, I see signs for hope and great promise for a spiritual rebuilding, where our lives can be predicated on sustainable practices, both material and spiritual.”