Patrick Neufeld plays for the Blue Bombers and roots for the Lions. The Luther Lions, that is. 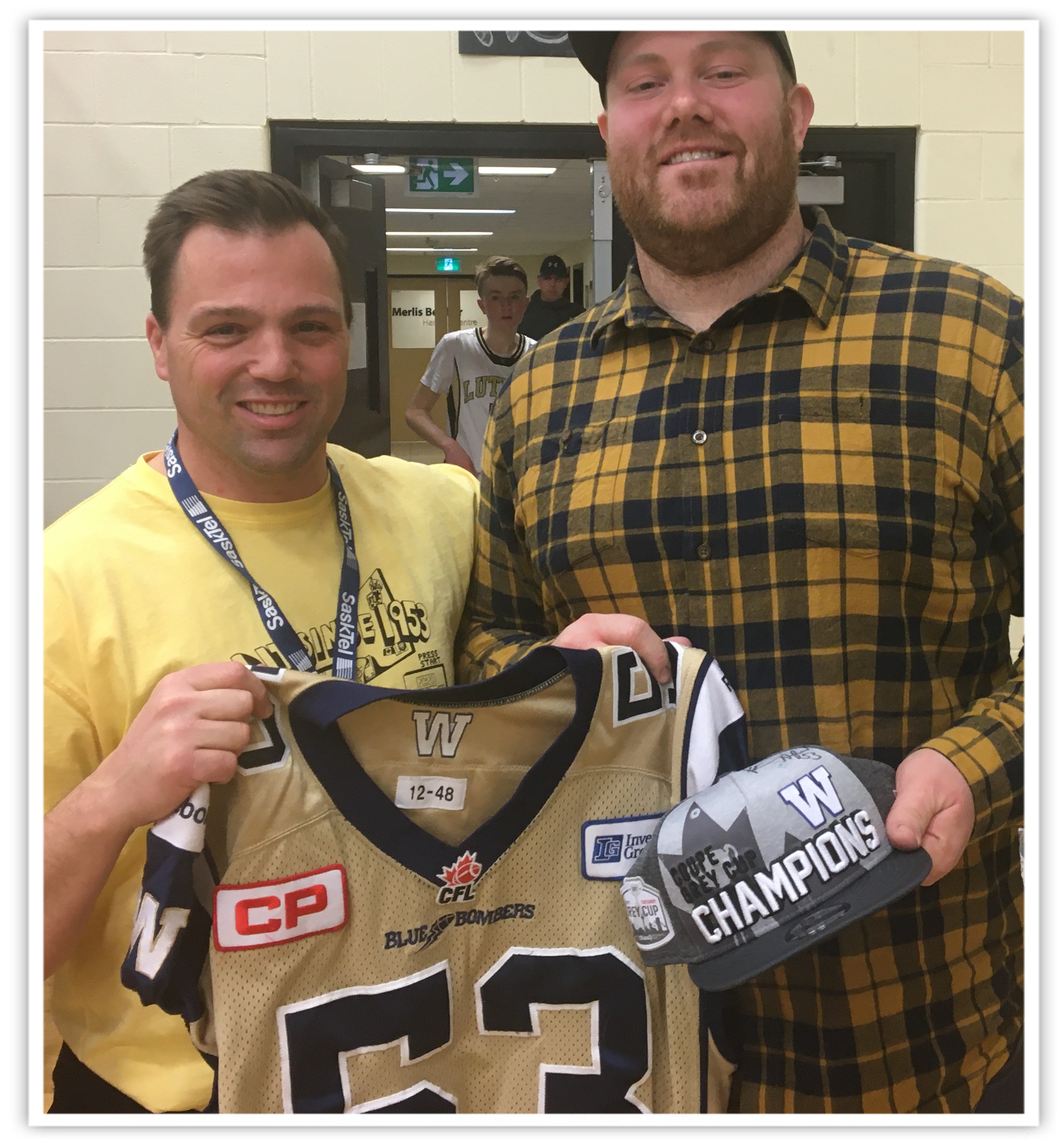 “I had such a phenomenal experience here in high school,” Neufeld said. “I still have a lot of connections with teachers.

“Coming back, you can still feel that nostalgia in the building, even though there’s a new gym, when you’re walking through the halls. It’s a place filled with tradition.

Neufeld, a University of Saskatchewan Huskies alumnus who spends his off-seasons in Saskatoon, drove down to Regina for this year’s L.I.T..

Upon returning to Luther, he presented a game-worn Bombers jersey and a Grey Cup hat — both of which he autographed — to his old school.

Neufeld left his signature in another context, helping Luther win its most-recent L.I.T. championship 14 years ago.

“It’s still one of the fondest memories I have in my sporting career,” he said. “You’re playing a game you love with all your best friends and you never think it’s going to get better than that, and then you win one of the most iconic tournaments in Canada.

“To win it the way we did, we beat three really great teams — who, coincidentally, were all Spartans — it was such a cool thing. We won provincials in football that year and then ended up winning L.I.T.. It was a pretty magical year for our senior year.”

Neufeld didn’t win another championship of any description until Nov. 24, 2019, when he helped Winnipeg defeat the Hamilton Tiger-Cats 33-12 in the Grey Cup game.

Blue Bombers fans rejoiced over their first championship since 1990.

“The reception we’ve had from not only Winnipeg, but also from Bomber fans anywhere and everywhere, has been amazing,” Neufeld said. “People waited 29 years to see us finally hoist that Cup. It was pretty special to see the emotional relief people had.”

“Looking back, just going to Luther and playing basketball and being around this tournament, you know the prestige that it has,” Neufeld said. “You know how important it is as a Luther student.

“You always see the banners and all the tradition, so finally getting to win it in ’06, we finally got to be a champion of this tournament that people revere so much.

“So I guess you could say in a little way that there are some similarities in the feeling and in the reverence that you have for a certain championship.”

“I was thinking of the things that I’ve carried on from Luther,” he reflected. “Probably one of the biggest ones was the sense of community and team.

“Luther is a very tight-knit community for a high school. People always talk about how important it is to find people who inspire you and push you. I’ve taken along that sense of team and sense of community and brought it into my professional career.”

By Rob Vanstone; Material republished with the express permission of Regina Leader-Post, a division of Postmedia Network Inc.