A Kidney Lost, A Friendship Gained 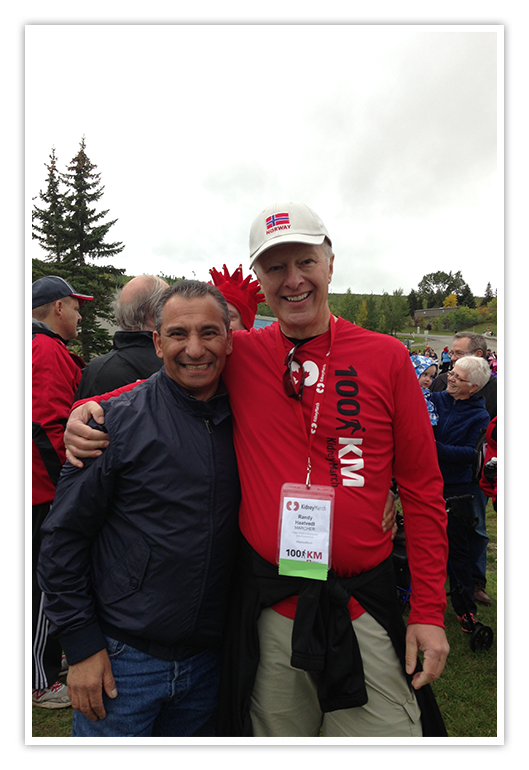 Randy Haatvedt (HS’72) has never been one to take his blessed life and good health for granted. He made a remarkably self-sacrificing decision after hearing that a long-time “friendly acquaintance” was facing kidney failure. That decision resulted in the loss of one kidney, but the gain of a lifelong friendship.

Randy says that he and Pat Dardano—the organ recipient and a man he now considers “one of [his] closest friends”—weren’t “friends,” per se, prior to the transplant. While working in downtown Calgary in the late eighties, Randy would occasionally get a shoeshine from Pat.

The two men “quite enjoyed talking to each other” and developed a mutual appreciation and respect over twenty years of shoeshine appointments, which continued even after Randy left his job in downtown Calgary. Randy says he was aware that Pat had been ill, but did not know the details. In 2011, Pat revealed that a long-time illness, Wegener’s Granulomatosis, had resulted in severely reduced kidney function. Soon a transplant would be necessary to save his life.

“After I left the visit, something awoke in me. I thought, ‘I’ve had a good life. I am in good health and was there something I could do?’” After thinking seriously about organ donation for a couple of months, Randy made some calls and the rest is the best kind of history. Even prior to testing, both men had a strong sense that this was right. “We both felt that it was just going to work out. We had no reason to believe this, but we just had, at that early stage, a feeling that everything would be okay.” And both men’s intuition proved true; after approximately four months of stringent, rigorous tests—both physical and psychological—the transplant took place on July 11, 2012.

Going through such a physically and emotionally demanding experience together altered their relationship in a way that Randy says was not expected: “Where before we were acquaintances, now we are the best of friends. [This outcome was] not the intent, but I love it.”

Giving back is clearly a priority for Randy, who now, with a healthy Pat by his side, works with the Kidney Foundation of Canada in Calgary on fundraising efforts and events. For many, giving back comes in the form of time, not organs, but that was not the path for Randy. “Why did I do this instead of something less physically invasive? I don’t know. It was a decision that I was at peace with. I never felt an obligation to do it. It was something I simply wanted to do. And in my case, I felt lucky because I had the pleasure of knowing and liking and respecting the person who would receive it.”

“Throughout the entire process, I wasn’t nervous at all,” reflects Randy. “I felt taken care of by the medical community. They wanted it to happen just as I did, but they weren’t going to risk my health.” And to others considering organ donation? “I would encourage them to look into it. It can be very fulfilling.” As a final reflection on his experience, Randy says, “I received a tremendous amount of satisfaction… more so than I thought I would before this process,”—a satisfaction that resurfaces whenever he watches his friend Pat enjoy family moments that might otherwise have never been.

Relationships marked by a close, lifelong and life-changing connection are not a new phenomenon to Randy, who after graduating from Luther College High School in 1972 moved into the Luther College at the University of Regina (LCUR) Residence. Although Randy lived in the LCUR dorms for only two years while taking some undergraduate classes through the University of Regina, he says that it was “one of the best experiences of [his] life.”

Randy says that living in Luther expanded his worldview. “I met people there from all over the world: from Palestine, New Zealand, Egypt... At that young age, you’re more open and accepting to new experiences, so as I met people from different backgrounds and different points of view, it really allowed me to grow more as a person and to really see things in a different way and that’s absolutely something that the LCUR Residence experience allowed me. It provided a fantastic opportunity to expand my own horizons without having to leave Regina.”

Randy feels so strongly about the benefits that await students at the LCUR Residence that he says he recommends it to anyone—even to people who don’t strictly need to move to residence. “It allowed me an opportunity to first experience independence in a way that is difficult to do when [a young adult] is still at home. As I remember from my residence days, I had to grow up and I used the residence experience and all of the opportunities—the pitfalls and the successes—to do so in a way that I just wouldn’t have been able to do in a more typical family environment.”

Echoing so many other LCUR Residence alum, Randy says that the residence experience was “an amazing time in [his] life” and that the friends he remains in contact with from those dormitory days say the exact same thing.