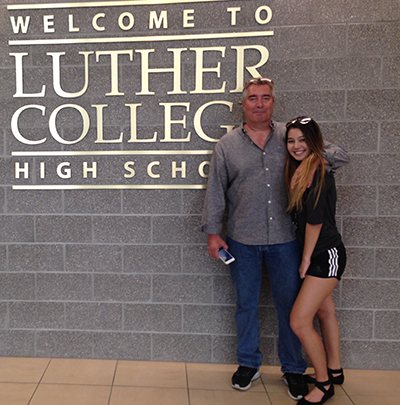 Although Rob Middleton (HS’78) and his family usually make an annual trek to Regina, Saskatchewan, from their home in Malaysia, this year’s visit was different: this time, in addition to visiting family, they left behind their seventeen-year-old daughter Thea to attend Luther College High School – just like her father did. While his daughter will walk the same halls, Rob anticipates she will spend significantly less time in the Vice Principal’s office. “Rudie Selzer,” he says with a laugh. “He was the Vice Principal – a wonderful guy – and I was his Bart Simpson. I was such a prankster, that if any prank happened, they would just call me in first.” A Bart Simpson-like character he may have been, but since graduating in 1978, Rob’s extraordinary successes in the television production industry prove that he’s definitely much more.

A lead role in a high school play provided Rob with the opportunity to co-host a program with CKCK-TV. While many would envy sixteen-year-old Rob’s position in front of the camera, he was actually more interested in what the crew members were doing. “It felt like maybe the guys behind the scenes were having more fun,” he says, and his constant questions of the crew and his eagerness to learn landed him his first job after high school as a cameraman at CKCK-TV. Over the years, Rob served in various roles ranging from Grip to Director of Photography to Weatherman. Eventually, he went on to direct and produce commercials.

When the opportunity arose to move to Hong Kong with a friend, Rob jumped at the chance. His initial attempts to break into the television production industry were unsuccessful; however, his big break eventually came when he landed a voice-over role for a BMW commercial. In the years that followed, he worked “his tail off,” doing everything from writing jingles and songs to dubbings, promos, and putting on rock concerts all over the globe with big names like Beyoncé and Def Leppard. But creative production, he came to discover, is where his heart and talents truly lie.

After being tasked with designing and launching an MTV-type station in Asia, Rob realized how good he was at that highly involved and creatively challenging task. He has since worked with big-name international broadcasters, including the Cartoon Network, Disney, and Discovery, to assist them in evaluating their on-air strategy, branding, personality, and presentation. Rob’s keen eye for what works attracted the attention of Astro, a major Asian satellite-TV and video-on-demand company. They offered him a contract to revitalize their system. After multiple contract extensions, he was hired outright, and is now the Creative Director, Head of Presentation and Promotions.

While Rob is clearly adept at network design and branding, his humility won’t allow him to take all of the credit. “As an outsider, you can’t just go in and expect to be successful at leading a team with an all-knowing attitude. Don’t impose your values – that’s why so many leaders fail their teams. You need to look at the other side first. Success will come when you work with everyone and take into account their ideas.” In fact, this humble, open-minded approach, Rob says, was reinforced for him during his years at Luther.

That’s why it was so important to him and to his wife that their daughter complete her secondary education at Luther. “I feel really comfortable having her here. I know she is safe. And, we also wanted to start preparing her for university,” says Rob. And so, the grown up and humbly successful Bart Simpson leaves his youngest behind at Luther, feeling confident that she too will find at Luther the foundation for her future successes.