At only twenty-six and twenty-seven years of age, brothers Derrick Emsley (HS’08) and Kalen Emsley (HS’07) are CEO and CMO, respectively, of tentree, a successful clothing company founded in 2012 with friend and partner David Luba. The concept of tentree is simple: for every item of clothing or accessory sold, the company plants ten trees as a way of giving back to people and the environment. 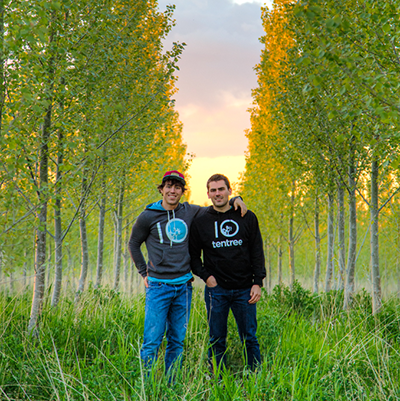 Kalen and Derrick’s shared passion for the environment can be traced back to their days at Luther College High School, where they heard many speakers talk about the serious issue of environmental sustainability. “We [were] only hearing about the problem,” Kalen says, “but no [one was offering up] solutions.”

After graduating from the Richard Ivey School of Business at the University of Western Ontario (Kalen in 2011 and Derrick in 2012), the brothers worked in the finance industry and did some travelling. The idea of tentree took root on a trip to Hawaii by Kalen to visit friend David Luba. Talking to some fellow beachgoers about companies who give back to the community or the environment led Kalen and David into a conversation about what they could do. “I said that we should plant trees and he said let’s do it by selling t-shirts,” says Kalen. “I was good at agro-forestry and forestry, and we both had a business background.” Back in Saskatchewan, they canvassed the Luther College community for feedback and to see if there was any interest in their idea: as it turns out, there was a lot.

Interestingly, the name tentree was a result of this feedback. People were not thrilled about wearing a t-shirt that said “onetonne,” one of the potential names for the company since one tree takes one tonne of carbon out of the air in its lifetime. The partners also felt that planting one tree per item sold wouldn’t be a big enough impact. “We [weren’t] in it to make money, so we said what’s the most we could possibly do and just get by. Ten trees was the [number] and tentree sounded really cool, so we rolled with it.”

Their first ever batch was 100 tank tops, which sold out in two days, and their customer base included strangers, not just family and friends. “That’s when we realized this is a real thing,” Kalen says. To date, tentree has planted about 9.5 million trees in twelve countries. Their products are sold on their website and in 350 stores across Canada, with additional stores in the United States and Australia.

The company will only work with other companies who also abide by environmentally friendly practices, andwho treat their workers fairly, including providing safe working conditions, fairwages, and equal rights.

“We started tentree because we wanted to help the environment and people and really protect the world that we like to play in,” Kalen says. “As the company progressed in creating garments, we had to ask the question, ‘How much damage does that do? Are the people who are making these garments getting treated properly?’ The focus was always to help people and to help the environment. Money was never the driver. The more efficient that we get, the more we are able to help other people and give back in other ways. [Giving back] was always just in our DNA.”

Now in its fourth year, tentree is going strong and making a difference for the environment and for those employed as tree planters around the world. The tree planters are employees of the non-profits that tentree partners with here in Canada and internationally, of which there are many, including: Eden Reforestation Projects; American Forests; Parks Canada; City of Sudbury; Trees for the Future; and Plant with Purpose. The aim is to plant in areas of the world that will benefit most, for example, in Mahabana, Madagascar, where there are around 350 people working full-time funded through the charity. Tentree is the sole donor for that village.

The company has also been involved in projects here at home. In 2015, Lac La Ronge Provincial Park in Saskatchewan was devastated by wildfires. Tentree visited the forest in the fall to see firsthand the loss that the park suffered. This loss hit close to home for these Saskatchewan boys, and the Emsley brothers wanted to help. They developed a very limited collection featuring one of the trees that had to be clear cut (essentially, as a stamp for the clothing), and launched the line at Sask Fashion Week in Spring of 2016. The line sold out, but they actually suffered a financial loss on each item sold in the collection because of the high cost of reforesting. “We only made the amount of items that [would enable us to] reforest in the area. We had no interest in making money on this project. … it was [about] planting the trees. It meant so much to us to give back to the local community. … we wanted to do our part.”

Tentree, however, isn’t the Emsley brothers’ first tree-planting business. Their first foray into environmental activism just after high school graduation was CO2 Tree Farm, a tree-planting business to assist large companies to reduce their carbon footprint. However, when they realized their clients were acting out of obligation and not passion for the environment or a genuine desire to make a difference, the brothers decided to take a break from their business, and the rest is history.

With their background in agro-forestry, they have always fully understood the environmental impact that their tree planting would have. What they were not expecting, however, was the positive trickle-down effect they would have on the areas in which they planted. “Trees have an impact that extends beyond benefitting the environment,” Kalen says, “but [tree-planting] also has a positive social impact. We had no idea that we’d be creating jobs, giving hope to communities, restoring ecosystems; we just thought that we would be reforesting trees that had been cut down in Northern Canada.”

As they look to the future, they are excited about partnering with Parks Canada on a reforestation project in mountainous parks. Since the areas that they will be planting in are difficult to get to, the collection will come out in 2017. In addition, they are looking to grow their retailer base in the United States, expand their product line, and – of course – plant a lot more trees. They also want to continue to learn and get even better at working with sustainable fabrics and being leaders in that respect.

The example these truly inspirational young men have set for other (often older) business people and entrepreneurs is nothing short of astounding; for them, the responsibility to give back and do better for the people and the land is a basic principle of their business. Not yet thirty years of age, these “young saps” have set a standard to which all companies should be held.

Both brothers have fond memories of their high school days at Luther College High School, including the usual suspects: extracurricular activities. For Derrick, it was playing basketball in the Luther Invitational Tournament (L.I.T.): “Everyone was excited about it. The school had an energy.” And, for Kalen, being provincial champs in football was a highlight.

But many of the memories they have from their time at Luther are life lessons that helped set them on the path that led them to success. “[We were taught] to work smarter, not necessarily harder. We learned to not waste time and to focus on what we need to know.”

For many students, attending Luther may seem intimidating if they are the only one of their friends going to that high school, but this is not something that Derrick sees as a downside to attending Luther; in fact, he feels that this gives Luther students an edge: “I didn’t know anyone else, but it gave me a good opportunity to meet new people. It forced you to move out of your comfort zone. Stepping outside the fold a little bit. Stretch yourself and find new opportunities that come when you step outside your comfort zone.”

The Emsley brothers agreed that they both benefitted from the “exceptional learning environment” and “small community” that made them feel as though they “weren’t just a number.” More importantly, the sense of being a part of a small community had an impact that would permeate into their larger-scale business model: having “the opportunity to come together as classmates and a school show[ed students] what you can accomplish when you come together.”

Certainly, this comes right back to their business, which sprouted from a conversation on a beach. Each milestone tentree reaches – 100 trees planted, 1,000 trees planted, 10,000 trees, 100,000 trees, and soon, that million tree mark will be surpassed – is evidence of that lesson they learned at Luther: when they come together, people can change the world. And the Emsleys are doing just that – one tree at a time.