As Design Director of Vanity Fair, New York based Chris Dixon (HS’86, U’91) aptly describes his work as “the visual side of journalism. You get to tell important stories,” he says, “and work with contemporary and conceptual photography and design. The cycle of reading, interpreting, and 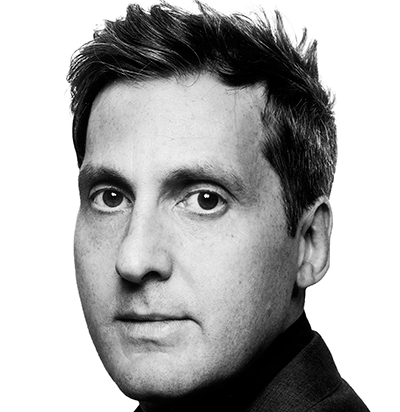 Dixon’s description of his work is saturated with the passion he has for balancing and blending journalism and artistry – a passion he says developed while he was completing his high school and postsecondary education. Chris first graduated from Luther College High School (LCHS) in 1986 and then obtained a Bachelor of Arts in Psychology from Luther College at the University of Regina (LCUR) in 1991. Citing the liberal arts education he received at Luther as “a good base to start from” and further motivated by his strong interest in visual design and problem-solving, Dixon was driven to pursue another degree – in design – and in 1997 he completed a Bachelor of Fine Arts in Communication Design at Emily Carr Institute of Art & Design.

Dixon’s impressive resume speaks to his high level of talent. He was hired right out of art school as a creative director at Adbusters Magazine – a magazine about politics, the environment, and activism. “I learned so much through the nearly autonomous process of redirecting its design,” says Chris. “After that, I had the incredible opportunity to move to New York and work at the New York Times Magazine, introducing me to the heart of journalism.” After two years at the New York Times Magazine followed by eight years as the design director of New York Magazine, working with countless inspiring photographers, journalists, and editors to produce a creative, design-driven magazine, he eagerly took on the challenge of re-inventing an iconic brand at Vanity Fair. “With a design-savvy editor in Graydon Carter, we designed a new logo, developed new layouts in the magazine, section-by-section–– drawing out the aesthetic appeal and sophistication of the Vanity Fair brand.”

Vanity Fair, founded in 1913, covers topics as wide-ranging as business, media, fashion, Hollywood, technology, art, architecture, and culture. In his day-to-day role as Design Director there, Chris oversees all the visual aspects of the monthly magazine, in addition to the websites, social media, visual design of videos, and design for any major events that they host (a large conference in San Francisco or the Oscar Party in Los Angeles, for example).

He is certainly not a one-man show, however, referring to magazine work as “collaborative” in nature. Each month, he works closely with editor Graydon Carter to create all of the magazine’s art. He oversees a staff of eight people in the art and design department who team up with photo editors, photographers, writers, and editors to produce each story. “As designers, our job is to read all of the stories and bring them to life visually, using photographs, diagrams, typography, layout design, cover concepts, and photo shoots. With the evolution of the Vanity Fair brand over the past few years – developing new websites, social media, a business and media conference, and more – my department continues to expand its reach as we create design work for all of these new platforms.”

Clearly, Chris finds his career rewarding in a multitude of ways. He tells us that he looks forward to a future that continues to involve the “incredible talent” that surrounds him – “from photographers to writers to illustrators and editors. I hope to continue growing alongside them as we take on new projects in the changing world of media."

An alumnus of both the high school and university campus, Dixon understands thoroughly the benefits of being a Luther student. In addition to “provid[ing] an astoundingly thoughtful education,” Chris also credits Luther College for giving him “a broad appreciation of the world” as a result of “its embrace of so many fields, from the visual arts and film to science and history.” The “world class education and personal focus from teachers” ensures that Luther “has a unique ability to make each student feel valued and truly embraces students for who they are.” Like so many other alumni of both the high school and university campuses, Chris also recalls the innate ability Luther has to foster a strong sense of community, on a number of different planes.

“The Luther College community focused not only on the students themselves but on their relationship to the school and with each other. I think that the thoughtfulness of the advisors and professors within Luther brings a warmth and connection to the University I would not have had otherwise.” And, again echoing his fellow alumni, Chris tells us that he still keeps in touch with most of the friends he made during his student days at Luther and has enjoyed watching their successes. I think it is safe to say, Chris, that those friends would say that the feeling is mutual.