“I didn’t choose it; it chose me,” is how Rori (Lawson) Lee responds when you ask her how she became a registered psychologist. 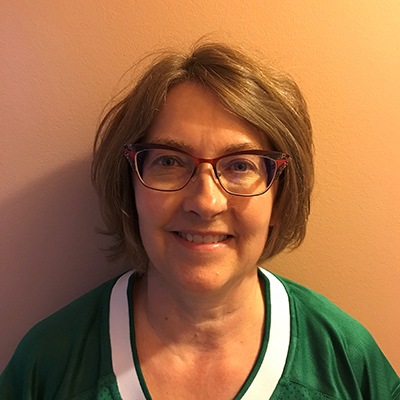 When she graduated from Luther College High School in 1987, Lee didn’t plan on going to university. Instead, she went to SIAST (now Saskatchewan Polytechnic) and took an administrative assistant course, working for law firms for a number of years and then doing clerical work in nutrition for the health district in Regina.

At this point she realized she needed “something more” and decided that university was her next step. But what would she study? One of the first professors she met at Luther College at the University of Regina was Paul Antrobus, who inspired her to major in psychology. She convocated with a Bachelor of Arts Honours in 1997.

Lee was instrumental in setting up the student-led Peer Support Program at Luther College. “A group of us were talking about seeing students struggle with course work or personal issues. There were not a lot of options at that time to seek out counselling from a professional, especially on campus,” she says. They approached Mary Hampton and Paul Antrobus to get the program up and running. “I know a lot of people who have come through Luther who have benefitted from it.”

Knowing it’s difficult to have a career in psychology with only a BA, Lee pursued a master’s degree in education from the University of Regina, convocating in 2001. After a few terms with Counselling Services at the U of R, she decided that traditional counselling wasn’t for her. Working with kids appealed a lot more; she applied as a school counsellor in Yorkton, but there was also an educational psychologist position available. When they offered her both jobs, she chose the latter because it happened to have a higher salary. “I feel like I fell into it, but I think there was divine intervention. I have a skill set that meshes really well with this position. I’ve really grown into it, and this is where I’m supposed to be,” she says.

In her current position as a psychologist with Regina Public Schools, Lee assesses students having learning issues. “We need to understand the ‘why?’ in order to develop interventions specific to them that will hopefully change the trajectory of what they’re feeling in terms of frustration,” she says. She also supports students with behavioural challenges and teachers who need to adapt the curriculum to accommodate students’ needs.

Lee’s experience at Luther College helped set her up for success in her career. When she was disengaged with high school and bored with the English curriculum, Steve Haddad encouraged her to go into the English IB program. “My grades weren’t good enough, but Steve went to bat for me. Because of that class, I felt like I could do university. I didn’t realize how profound it was until later,” Lee recalls.

Barb Wright was also instrumental. “Math is not my forte. Barb was one of the few teachers in terms of math that I actually understood. I never wanted to work with numbers, but now I work with stats in my job every day,” Lee laughs.

And when she wrote her licensing exam to become a registered psychologist, Hampton was top of mind. “Mary’s exams were always really hard, so the licensing exam wasn’t the hardest exam I’d ever written. I was so thankful for that,” Lee says.

Lee has been active in leadership roles with the Saskatchewan College of Psychologists, her profession’s regulating body. She has served on its council for eight years, starting as secretary, and then moving on to president elect, president and past president. She credits Antrobus, who was so generous with his time, for inspiring her to give back to the community. “I firmly believe in continuing to volunteer and support people coming into the profession,” says Lee, who mentors new professionals and supervises practicum students and provisional members, who have to fulfil requirements before they can practise independently.

One of Lee’s proudest accomplishments is the role she played in establishing the Truth and Reconciliation Commission Task Force for the Saskatchewan College of Psychologists. “We are addressing the calls to action and embracing reconciliation within the college,” Lee says. The group’s first meeting happened to be on the day that 215 Indigenous children’s graves were discovered at a residential school in B.C. “It was very poignant, and there was a sense of urgency in moving forward. But it takes time, and we’re trying to be very respectful and do it in the right way. We don’t need to colonize this process, as well.”

As a seasoned member of the profession, Lee is beginning to think about what she wants to leave behind. “I want to leave a legacy of moving forward in terms of reconciliation. I feel we’ve inherited this issue – all of us have – and we have to be part of that solution. I hope it takes fewer generations to heal than it took to damage things.”