Running a lemonade stand is a childhood rite of passage; in this way, seven-year-old Aimee Schulhauser’s (U’03) plan to set one up made her just like every other kid. Her path diverged from the norm, however, in the pages of a coiled Hilroy notebook, the contents of which reveal a detailed 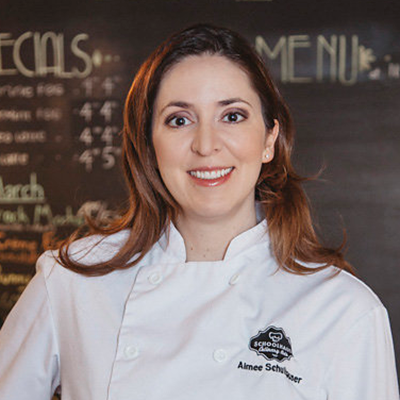 business plan for a lemonade stand that included an important insight: her family’s farm was located right next to the grain elevator. She understood this was signifcant – every farmer would pass by her lemonade stand; she had the market cornered. While the stand never did come to fruition (Mom said “no” to a set-up so close to the gravel road), Aimee’s entrepreneurial drive was born. Today she is the owner and operator of three very successful Regina-based culinary businesses – Evolution Catering and Fine Foods (2005); Tangerine (2010); and Schoolhaus Culinary Arts (2014) – and a highly respected chef and businesswoman.

It was Aimee’s move to Regina to attend university that first introduced her to her life’s work:  being away from home meant that she had to feed herself for the first time in her life. “My mom was such a good cook,” Amy says. “Looking back, I took her for granted because we always had great food. It seemed effortless to her.” Aimee admits that, at first, she and her roommate ate a lot of packaged, unhealthy foods. The subsequent weight gain was a consequence Aimee was simply unwilling to accept: she determined that she would learn how to cook. This decision changed her life. She subscribed to a cooking magazine and started cooking. “I found that I was actually good at it. And I loved the food I was making; it delighted me. I remember first eating cilantro and thinking ‘what is this?! I don’t know if I hate it or love it, but I’m going to keep going.’”

Aimee was pursuing a degree in Petroleum Geology, and it was in the middle of one of her most stressful semesters that she told her mom that she thought she wanted to be a chef. Her mom encouraged her to finish her degree and Aimee followed her advice. Days after writing her last final, Aimee packed up and moved with her partner, Dean Hooker, to Calgary, Alberta where she worked for an oil field service company and took night classes in small business management. When the company moved the division she worked in to Houston, Texas, she accepted their severance offer, viewing it as a sign.

She started cooking school at the Southern Alberta Institute of Technology (SAIT) in 2003. Aimee “loved every second” of her year at SAIT. “I sat in the front row,” she says. “I asked for extra projects. I joined every volunteer event that you could do.” She had always known that she wanted to run her own business, and now she “knew that the business would be catering.” Her diploma in Professional Cooking in hand, Aimee wrote yet another business plan, then packed up and moved back home to Saskatchewan in 2004.

By 2005, Aimee was busy enough to go full-time, and she decided to rent a space in the strip mall on 14th Avenue for Evolution Catering and Fine Foods. Years later, Aimee’s landlord offered her an additional space in the same building. “I didn’t know what I was going to put in there,” she admits, but ultimately she decided to expand the tiny lunch counter they had out of the catering side into a full-scale lunch location resulting in Tangerine in 2010. Four years later, in 2014, space was available in the basement and she formally launched her cooking school, Schoolhaus Culinary Arts. Her businesses have grown and she now manages a staff of twenty-three people. In spite of the busy lifestyle that comes along with running three thriving business, Aimee still makes giving back to her community a top priority.

Nearly two years ago, the Regina Food Bank approached Aimee’s company requesting help to develop a pilot program that would provide cooking classes to clients who receive food hampers. The idea for the program arose because Food Bank staff noticed that healthier foods were often left behind in favour of quick, ready-to-eat options. Including recipes with the hampers didn’t seem to make much of a difference. Aimee agreed to help, hoping to help others to love to cook as much as she does. She taught that first program herself. Eight participants graduated. “That first group was absolutely incredible,” she recalls. “They came from all walks of life and all different backgrounds and every one of them had a different story. It was really humbling to know that poverty was happening in our city and the barriers that others might just see as a blip in the radar became insurmountable for them and affected their lives.”

The program continues to run today and is now open to residents who are not clients of the Food Bank. Participants leave the class with new knowledge and skillsets: they learn how to take apart a chicken; they tour a grocery store to learn how to find the best prices and how to read labels; and they complete the Level 1 Food Safe, which equips them for an entry-level restaurant position. Aimee continues to work with the Regina Food Bank to expand and improve this important community program.

Aimee is a strong supporter of her community in other ways, as well. She sits on the board of Women Entrepreneurs of Saskatchewan, where she will take over as chair in May 2017, and she is devoted to empowering women. Aimee’s staff is almost exclusively women. “We just hired a man for our catering department a week and a half ago,” Aimee says. “Other than that, it’s all women. I mean, it’s not a requirement. We just find that women tend to gravitate towards us because it’s female-owned and operated, and kitchens can have a reputation of being quite harsh, especially to women. Often [women in that environment] face bullying and harassment. But they know that won’t happen here.” Aimee also just recently joined Economic Development Regina (EDR) -- a council that provides entrepreneurial supports and looks to ensure that Regina is an attractive location for future entrepreneurs.

So what’s next for Aimee? “Well,” she says, “I turn forty this year and I tell people that I’m just getting started.” Look out, Hilroy! It’s pretty clear that Aimee’s got a lot more where that lemonade stand came from.

Aimee is grateful to have completed her degree at Luther College at the University of Regina. “No education is ever wasted,” says Aimee. “My liberal arts degree set me up for better things. It was a great foundation on which to build what I’m doing now.”

Coming from a small town, Aimee knows that for many students entering into university can be an intimidating experience, but recalls that Luther provided a setting that was “helpful and comforting.” Aimee notes that at Luther she “wasn’t just another face in the crowd.”

So why should other students go to Luther? “I think of Luther as a customized experience. You will get the one-on-one time, that little something extra, that you need. Have that catered experience, if you will.” And if you can trust anyone’s recommendation about an incredible catering experience, it’s most certainly Aimee Schulhauser’s.