The Globe and Mail’s Wendy Cox has interviewed thinkers as diverse as John Ralston Saul and Sting in her nearly 35-year career in journalism. But the person who left one of the deepest impressions on her life wasn’t someone she interviewed, but rather someone who helped launch her impressive career— her former Luther High School English teacher, the late Mark Winkler. 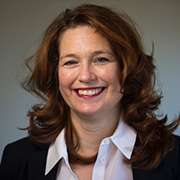 “He truly inspired me to do the work I do,” The Globe’s B.C. Bureau Chief confides, radiating a warmth and friendliness that demonstrates why she’s so good at her job, getting others to share. “He taught me to communicate a thought or idea in a way that moves people and makes them think. He was such a passionate advocate for the written word and for diversity of thought. When my parents told him I wanted to consider journalism, he told them I needed to kick it up a notch. And he was going to see that I did— and I did.”

Wendy recalls landing at Luther needing a fresh start after some peer-group troubles in elementary school. “I arrived as a stranger in grade 9 and wound up making lifelong friends,” she recalls. “Heather Sterling’s father was a Psychology professor at the U of R and very influential on the development of my left-of-centre beliefs. Dave McKenzie was a ‘Tiny Tory’ who advocated right-wing thought and impacted me as well. I got exposed to so many different backgrounds and points of view. Our teachers really encouraged diverse, healthy debate.”

Wendy remembers being stunned that Pastor Christiansen opened their Ethics class up to a debate on abortion, at a time when Dr. Henry Morgantaler’s abortion clinics were making headlines for challenging restrictions on women seeking abortions. “Even though Pastor C was probably on the anti-abortion side, he encouraged us to think critically and find answers for ourselves. We were able to peel the lid off the topic and look at it from so many different perspectives. That really made an impact on me as a 16-year-old girl,” she says. “Pastor C really inspired us to step outside our own echo chambers.”

Wendy says that natural curiosity and respect for differing points of view helped set the framework for her own journalism career. “I find there’s so much divisiveness and polarization in the world today—especially when it comes to politics. People that are protesting vaccine mandates or pipelines or Fairy Creek (the last unlogged old-growth valley on southern Vancouver Island) deserve to be heard. But so do those who think pipelines offer needed economic development or those who believe vaccines are justifiable, along with restrictions. It’s important to have those conversations.”

Wendy is proud of the fact that the lessons she learned at Luther have been passed on to her own children—a son aged 19, and two daughters, aged 17 and 13. “I always tell them that words matter. It’s not just pro-life, pro-choice and anti-abortion. That’s not fair because there are shades of grey, and we can’t inflame a situation by labeling something black or white. I always tell my kids we need to be able to understand other points of view if we’re going to survive in this world,” she says, noting that she and her husband were thrilled when their son was accepted into Vancouver College High School four years ago. “The school is founded on the same principles of diversity and respect as Luther. When we arrived to get him settled in, it felt like home.”

After Wendy graduated from Luther back in 1984, she attended the U of R’s School of Journalism and worked two summers at the Leader-Post before being hired by the Canadian Press in Winnipeg. She spent time as a political reporter in both the Ontario and B.C. Legislatures, as well as on Parliament Hill. “I got a good tutorial canvass of the country in those years,” she recalls. “I worked from noon until 9 p.m. on the Hill, and as things closed down in Ontario, I could always find quotes for my stories out west as the night went on.” Wendy soon became the B.C. and Yukon Bureau Chief for the Canadian Press before she landed her current role as The Globe and Mail’s B.C. Bureau Chief in 2013.

While people may rely on social media for their news updates, Wendy argues there will always be a demand for deep-dive stories that go beyond the 280-character limit on Twitter. “I consider myself incredibly lucky to work for The Globe and to be able to provide perspective on the deeply serious issues we’re facing. We’re never going to be able to bridge these divides if people are incapable of getting out of their own echo chambers. I think The Globe does that,” she says, adding: “If I can reach someone in a moment of quiet, and have them say ‘Oh – I haven’t thought of that before’ on a divisive issue, then I’ve done my job.”

Wendy looks to her kids as her inspiration. “I love having open and honest discussions with them about the issues we’re facing. I’m so pleased at how informed they are. They’re not convinced they’ve got it all right, and they’re open and receptive to new ideas,” she says thoughtfully.

In looking back, Wendy thinks that may be one of the biggest legacies her former English teacher, Mark Winkler, left her. “He taught me so much and I owe him a lot. He died from cancer after I graduated, and the loss was felt by everyone. But his spirit of openness and kindness towards others—no matter their views—has really benefited me in my career, and it’s something I’m proud to have passed on to my children.”