The new head of the Mackenzie Art Gallery is a man with proud Chickasaw Nation roots from southeastern United States, but John Hampton (U’09) is quick to honour his non- Indigenous mother for shaping his understanding of the world. 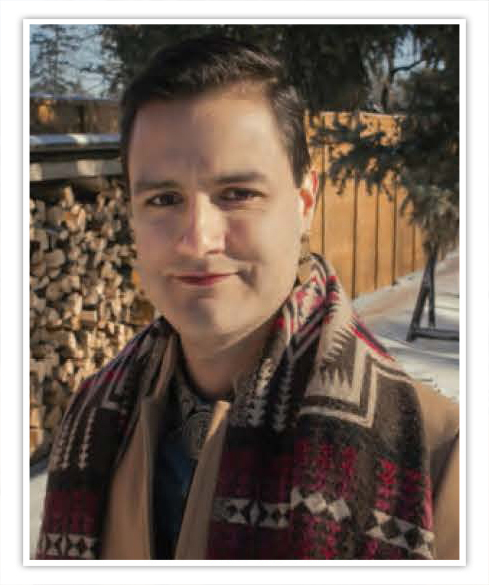 “My mother, Dr. Mary Hampton, taught psychology at Luther between 1991 and 2018 and, while I may be biased, was one of the university’s most cherished profs,” says the soft-spoken and thoughtful new Gallery CEO and Executive Director. “As an adoptee, she’s the only maternal ancestor I know, but I couldn’t ask for more. Her PhD dissertation spoke of what it means for adoptees to have children and start a new family tree. That sense of family— of ancestral relations, both distant and recent—has helped shape my understanding of belonging and community. She set the example for me of bringing the kind of care into my work that she applied to her academic research. She’s definitely had a strong impact on my curatorial practice.”

John says the word ‘curator’ comes from the Latin word ‘to care,’ and that curators need to care not only about the art itself, but the people who put their heart and soul into its creation. “It’s all about inter-relationships and creating opportunities for people and cultures to lift each other up. My mother was so good at that. I see so many strong parallels with academia and the art world. Both are striving for a new understanding of the world, and both help us understand who we are as a society.”

When John was just a baby, the family left Boston, where Mary was pursuing her Doctorate in Psychology at Harvard, and moved to Alaska, where Mary completed her dissertation while teaching at Fairbanks University. When John’s father, Eber, was named President of the Saskatchewan Indian Federated College in 1991, the family moved to Regina. John recalls that, as a non-Indigenous person, his mom thoughtfully navigated between the two cultures while working on the Completing the Circle project, which deals with Aboriginal protocols on end-of-life care.

John worked with his mother on that project from 2004 to 2011, and became close with Elder Betty McKenna, who is now Elder-in-Residence at the Mackenzie. John’s mother was also the primary researcher on a prairie-based network called RESOLVE (Research and Education for Solutions to Violence and Abuse), focused on ending violence against women and girls.

“She set this beautiful example for our current generation of researchers on how to do cross-cultural research in an ethical way,” John says admiringly. “I remember saying as a teenager that since I’m the son of a strong feminist, I must have grown up in an environment without sexism. But Mom quickly corrected me, pointing out that sexism was so pervasive that even with my upbringing, I still couldn’t see it. It was an important lesson about how blind we can be, even if we have a theoretical understanding. I try to apply that lens in my daily life and throughout my work at the Mackenzie.”

John attended Luther College because of his mother, and loved the personal touch offered by teachers and staff. “I remember one semester, Mary Jesse emailed me because she saw I was registered for a class that would move me off the academic plan we had developed. She always went above and beyond.”

After graduating, John worked as a curator at the Neutral Ground Artist Run Centre in Regina, and then obtained his master’s degree in Curatorial Studies at the University of Toronto. He was curator-in-residence at the Art Museum at the U of T, and was Artistic Director at an artist-run centre there, before heading west to Brandon to head up the Art Gallery of Southwestern Manitoba.

“My mother retired in 2018 after being diagnosed with frontotemporal dementia. She’s living at Harbour Landing Village and has weekly Zoom visits with the friends she’s made throughout her career, such as Ann Bishop [on RESOLVE], Dr. Brenda Anderson [who teaches Women’s and Gender Studies and Religious Studies at LCUR], Wendee Kubik, and Darlene Juschka. They’ve loved and supported her throughout this transition—they call themselves ‘The Bitches,’” he laughs.

John says that while media often pay more attention to his father, who gave him his Indigenous identity, it’s his brilliant and nurturing mother who deserves much of the credit for who he is today. “She’s been an inspiration to me my whole life,” he says proudly. “She’s an incredible woman.”