When it comes to pop superstars, South Korea’s Taeyeon rivals the likes of Taylor Swift or Ariana Grande. Everything the K-Pop sensation touches turns to gold, including her latest single “Dear Me”, a soaring anthem about self-love and acceptance. 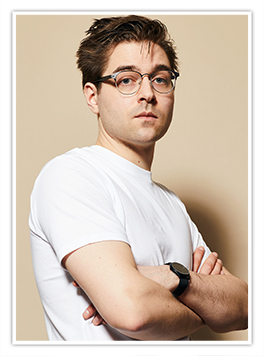 It’s a catchy ballad accompanied by a gorgeous video, emotional lyrics and phrasing, soulful acoustic guitar and piano, and rising strings. In short – it’s the perfect pop song. And it just reached #1 in 25 countries. It also happens to be written, produced, and musically-performed by Luther College at the University of Regina alumnus William Wenaus (U’14), a professional songwriter who originally hails from Moose Jaw, Saskatchewan.

“I come from a very musical family – the youngest of five,” the earnest 27-year-old explains. “I took music theory, voice, piano, guitar, and trombone. My world was filled with music activities and lessons.”

Will wrote his first song at the age of three, when his mom found some musical notes drawn on a napkin, and he’s been working towards the goal of being a professional songwriter ever since. “I’ve been making connections, working strategically, and getting to know all the right people for years. It’s been an incredible amount of hard work and perseverance, and still is,” he says.

Will says that writing a hit song is a process of discovery, akin to an archaeologist dusting off a piece of pottery to find what’s already there under the layers of sediment. For Will, his job is to reveal “that creative idea and share it,” but, as he points out, “it doesn’t happen overnight. Like any writing, you can labour over it for months, even years – editing and re-drafting – until you uncover what the song wants to be.”

Will is extremely reluctant to name names or outline the finer details of just how a songwriter from Saskatchewan was able to get his foot in the door and connect with Taeyeon’s ‘people.’ “It’s kind of like how a magician never reveals his secrets,” he laughs. “There’s a lot of mystique involved. When I was an outsider, I absolutely hated it when people wouldn’t give me contacts, but music people are very guarded about their channels. It takes a lot of research and patience to get your songs in front of the right people.”

Will intentionally writes for the Asian market, but his own listening tastes are very eclectic. “I love everything from 1980’s Japanese ambient music to Swedish black metal,” he laughs. “In writing songs, I want to bring an element of integrity to pop culture.”

Surprisingly, Will didn’t study music at Luther College. He obtained an Honours English degree with a minor in Philosophy (2014), and then completed a Master’s degree in English at the U of R (2016). His says his formal education ultimately works in his favour as a songwriter. “Luther has such high academic standards, which fostered a very professional work ethic in me. And doing my MA gave me critical research skills. But I’m never
one to rest on my laurels.”

Will comes across as a fearless underdog. “This is a huge milestone, but it doesn’t mean I simply wait for the royalty cheques to come in and my life is set. It’s like passing a professional exam. Once you’re a ‘hitmaker,’ you may have the title, but you still have to keep working extremely hard. This is just one hit. It takes time to establish credibility and staying power in the music industry.”

For Will, that means continuing as a sessional lecturer in the English Department at Luther College while furthering his career as a professional songwriter. “I’m aiming to set up my operations in Vancouver, British Columbia closer to the Asian market, but in the meantime, I need to keep writing, proving myself, and building contacts, one step at a time.”

The next big pop hit from superstars like Taeyeon and so many others could very well come from Will’s latest creation. And that has this humble songwriter singing all the right notes.