When William (Will) Brooks (U’00) accepted the position of Artistic Producer for the theatre company Shakespeare on the Saskatchewan in 2014, he did so with a sense of “coming home.” 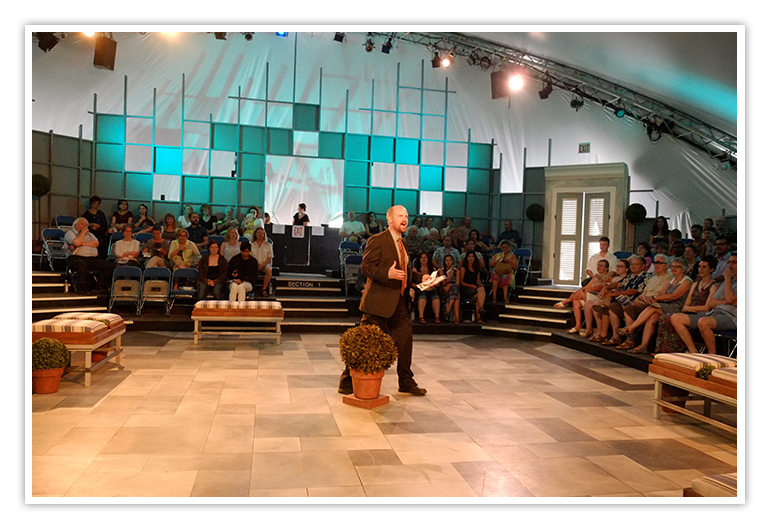 After graduating from Luther College at the University of Regina in 2000 with a Bachelor of Fine Arts (BFA) in Theatre Performance, Will spent a handful of years doing contract work as an actor—including many roles in Shakespeare on the Saskatchewan productions—and in nearly every position offstage, including writing, directing, and stage management.

Prior to his appointment as Artistic Producer, Will had been working at Persephone Theatre in Saskatoon as the Youth Program Director. Will helped to grow the theatre school from ninety to 400 students and saw the inception of the new Youth Presentation Series as well as The Young Company. Will now has the pleasure of working with adult actors whom he taught as children at Persephone.

Will admits he was hesitant to leave Persephone, but ultimately couldn’t pass up the opportunity: “[Shakespeare on the Saskatchewan] is a company I really love and respect. It has an amazing history and a lot of potential. And it holds a special place in my heart: this was the company that gave me my very first role as a professional actor after graduation. I spent some of the best summers of my life there.”

Under Will’s direction, a current focus for the theatre is embracing and representing diversity in its work. “There is a major gender imbalance in theatre, but it’s even more extreme in classical theatre,” says Will. To create more gender-balanced casts, they employ methods such as gender-blind casting, a tactic they utilized in 2016 when they did a play called J. Caesar, a version of Julius Caesar with an all-female cast.

Ensuring that women and diverse groups are adequately represented on-stage is something Will is passionate about, not only to provide those groups with equal opportunity in the workforce, but also because the words of Shakespeare—“the great master playwright”—“hold a great deal of power. By only giving those words to a select group of people, we limit that power to that group and [are] withholding it from other groups. It’s only right to be sharing that power. And when an audience views those people on the stage as having power, a very silent damage is being done if they themselves aren’t represented.”

Will says that diversity also provides for a higher production value. “A fascinating thing happens when an Indigenous artist gets to speak those words. They bring their perspectives and backgrounds to the words and to the characters they play.” This was demonstrated when in 2015 Shakespeare on the Saskatchewan partnered with the Gordon Tootoosis Nīkānīwin Theatre, an Indigenous theatre in Saskatoon, to produce an indigenized version of Othello wherein the script and storylines were adapted to include Cree language, traditions, and ceremonies.

Ultimately, Will views each play as an opportunity to have a conversation with his audience, and he is very mindful about what he is saying. He recalls that when working with children at Persephone he “carr[ied the] burden of teaching something.” And while “the obligation to teach is apparent when you’re working with kids,” Will contends that “this approach can and should apply to adult audiences as well.”

Looking to the Future

For Will, regarding each play as an addition to a larger, overall conversation brings a great deal of joy to the programming aspect of his job. Currently, Will and his staff are working hard to ensure that the shows slated for the upcoming Summer 2018 season are as incredible as he anticipates them to be. He’s especially excited about their rendition of Titus Andronicus – a play marked by violence, but reimagined using a cast of only puppets. Collaborating with another Saskatoon-based organization, the entire show will utilize three-foot tall puppets and shadow puppetry. “I think it’s going to be really beautiful, and if you ask me four months from now which plays have been my favourites, I suspect that this will be one of them.”

In addition to working on what is bound to be yet another successful production season, the focus at Shakespeare on the Saskatchewan is redeveloping a new, more permanent and sustainable theatre space. “We have this beautiful little spot on the riverbank in Saskatoon and every year we go out there and we build a theatre venue out of a tent. It takes a lot of work to build it in the spring – a great many hours of intense physical labour… only to take it all down in the fall and do it all over again the next year.” Looking at this process as a part of their strategic planning, it became apparent that creating a set of infrastructures that are more sustainable, would save a great deal, both financially and in terms of people’s time and labour.

Aiming to open in 2020, the festival space will have custom made infrastructures, some permanent buildings, and a main stage performance area. This “wonderful, magical” site will be redeveloped as a park, through which the public river pathways will run, and also has a focus on expanding accessibility. Currently, only Shakespeare on the Saskatchewan has access to their temporary theatre site, as it is only erected during the performance season, but this project’s more permanent structures will be available for public and community use before and after Shakespeare on the Saskatchewan’s theatre season. “It will be a great space for all sorts of events: concerts, festivals, sporting events, and ceremonies, and since it will be available for use year-round, it will make for a great space for winter events, which aligns this project up nicely with the City of Saskatoon’s Winter City Strategy [a committee on which Will sits]. This project will be great for us. It will solve a lot of our challenges and collaborating with the City is a great thing.”

A great thing, indeed. One great thing after another, actually, is what Will is doing – not just for Shakespeare on the Saskatchewan, but for the City of Saskatoon in general. Collaborating with other organizations to up the artistic ante and promote their art and their work; generating important conversations among his audience members; not just being aware of certain societal imbalances, but actively opposing them through his work in the theatre; working to ensure that the Shakespearean stage is home to all, not just some; and utilizing his stage to empower and challenge everyone who is fortunate enough to attend one of his riverside performances. Originally from Regina, Will now calls Shakespeare on the Saskatchewan and the City of Saskatoon home. And to them, Regina collectively says, “you’re welcome.”