Optometrist Marcia Mitschke likes to tell her patients that seeing well is no excuse to skip seeing your eye doctor. In fact, the Luther College alumna (U’16) quietly con­fesses that she was one of those teens who rarely, if ever, saw the optometrist. 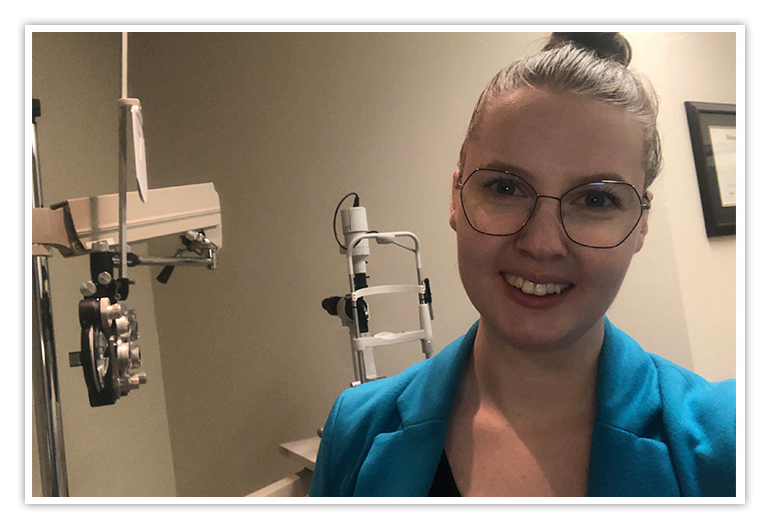 “I thought that because I saw real­ly well and didn’t need glasses, it wasn’t a priority. How wrong I was,” laughs the Moose Jaw Primary Eye Care Centre optometrist, who now advocates for regular comprehen­sive eye exams – at the very least, every two years.

“When I was 19 and getting my Bachelor of Science in Chemistry, I’d spend hours poring over text­books and doing homework on the computer. I was suffering from eye strain and made a point of seeing my optometrist for the first time in years. Not only did I wind up with a pair of reading glasses, but I was so inspired by the work they did, that I decided to pursue optometry instead of pharmacy!”

Marcia was someone who “abso­lutely loved school” while grow­ing up in Lumsden and actually thought she’d end up as a teacher. She naturally gravitated towards the sciences, especially chemis­try, partly because she was “really good at it” and partly because of her role models at home: both her parents were high school science teachers. “I was always a nerdy kid, but you’d be more likely to find me with my head in a book rath­er than blowing experiments up in the backyard,” she jokes with good-natured, infectious humour.

She wound up living in the res­idence of Luther College at the University of Regina, and there she met her future husband, François Boire, another chemistry major from the French community of Gravelbourg. “Honestly, I attribute Luther to bringing us together. Living in the same building and eating at the same table for those three or more years really cement­ed our relationship. When I left to pursue my second degree at Waterloo (Bachelor of Science, Doctor of Optometry), we did the cross-country-long-distance thing for four years while he went to the University of Saskatchewan to be­come a large animal veterinarian.”

While in Waterloo, Marcia contin­ued to work hard and was award­ed a lifetime membership in the Gold Key International Optometric Honour Society. “I was one of six students selected from my class of 90 optometrists,” she offers, quick to deflect the enormous signifi­cance of such an achievement. “It’s a much bigger deal in the States where it’s given lots of fanfare – I just got to wear a special gold stole at convocation,” she grins. Marcia is not only one of the nicest optometrists you’ll probably ever meet, but she’s also likely the most humble.

As part of her degree, Marcia did several placements across the country, with time spent in Wa­terloo, Lloydminster, Estevan, and Swift Current. “I was really lucky to spend the bulk of my place­ments so close to home, with my parents and younger sister (who is studying healthcare policy) just a short drive away, but also close to François.” The couple was plan­ning a big wedding this past April with guests invited from all across the country. Then the COVID-19 pandemic hit, so Marcia and François were forced to scale back to an intimate backyard wedding with only two close friends in their bubble serving as witnesses. “It wasn’t what I’d ever dreamed it would be, but it was still very love­ly,” she smiles.

COVID-19 not only changed her dreams of a big family wedding but also changed the way she works, with masks, temperature screenings, and additional clean­ing measures the new norm.

“There’s a few added steps now but that’s no reason to postpone your eye exam,” she laughs again, always the cheerful advocate for her profession.

Marcia lives the Luther principle of giving back. Not only does she coach rhythmic gymnastics but she routinely mentors high school students and undergrads – especially young women – about choosing a career in optometry. “It used to be that men totally dominated the profes­sion, but today, more than half of grads from optometry school are women. It’s a great career and one I’d highly recommend to anyone who loves people and loves the sciences.”

And just to make sure she’s driven the point home, she adds with a wink: “Do as I say, not as I did. Make sure you get that eye appointment in if it’s been a while.” Point taken, Doctor.