From L.I.T. to the Winter Olympics

Nancy Park (HS’92, U’97) still remembers watching her older brother, Chan Park (HS’89), head off each day to Luther College High School (LCHS), eagerly anticipating her own transition into the world of Luther. During her time at Luther she would have her first taste of media relations, an experience that would help her future career take flight. 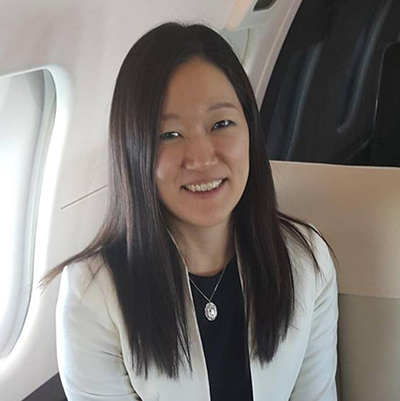 Nancy first discovered an aptitude for media relations during her involvement with the Luther Invitational Tournament (L.I.T.). Working on publicity for the event included engaging the media to garner attention and generate excitement. “I guess I could say that this was the start of it all, since I worked on that committee for two tournaments. I really liked working with media back then,” Nancy recalls, “and even did interviews with the local television stations, including CTV. [Those were my] first interviews ever.”

After graduating from LCHS in 1992, she attended Luther’s University campus and obtained a Bachelor of Arts in Political Science in 1997. In June of that same year, she began working in Corporate Communications at Korean Air, where she remains today. Her work at Korean Air and her interest in aviation led her to pursue an MBA in Aviation Management at Concordia University, which she completed in 2004. In 2012 she was promoted to General Manager for Human Resources. “I have always enjoyed the airline business,” she says. “[It] is quite dynamic and [there is] always something different happening.” In fact, her work at Korean Air presented her with an unexpected and once-in-a-lifetime opportunity: to be part of the 2018 Olympic Winter Games Planning Committee.

When the CEO of Korean Air became chair of the bid committee in 2009 for the 2018 Olympic and Paralympic Winter Games, Nancy was seconded from the company and designated Deputy General Manager, PyeongChang 2018 Olympic Bid Support Office. She worked with her team to promote PyeongChang, a local alpine city, as the host of the 2018 Games. Although she has always been interested in sports (during her childhood she swam competitively, and at LCHS she played volleyball), Nancy “didn’t expect to work in the Olympic Movement,” but she says it has been “really exciting to work on this project and be a part of [it].”

After winning the bid in 2011 to host the 2018 Games, Nancy returned for a time to her management position at the airline. But when the CEO of Korean Air was asked to be President of the PyeongChang Organizing Committee, Nancy also joined the Committee, taking on the role of Spokesperson and Director of International Media Relations. Currently, she works tirelessly to promote winter sports and the Olympic Winter Games – a role that certainly keeps her practiced at giving interviews: “I do a lot of media interviews for TV, but it was especially nice to do broadcast TV for NBC. I guess being on TV in North America made me the cool aunt for my nieces and nephew!” She also appeared on NBC’s TODAY show in New York, to unveil the medals for the Winter Olympics.

Nancy’s passion for aviation also comes in handy in her current role, as she travels to various cities world-wide to present to the International Olympic Committee (IOC) on the Organizing Committee’s progress – an experience she considers “an honour.” She also very much enjoys working with the different International Federations for sport in the lead up to the 2018 Games.

From her first experiences promoting LIT to the 2018 Olympic and Paralympic Winter Games, Nancy’s career is in full flight –thanks to her natural ability, hard work, dedication, and passion.

Nancy describes herself as someone who “always likes to try new projects,” which certainly explains the appeal that working on the Olympic Games has for her. Communicating well with others is also something she values, and this is no surprise, given the success she has achieved in her work, both at the airline and for the Olympic Games. Also aiding her success is some life advice she received along the way: from her dad – “Give 200%; this means trying harder, working harder, and thinking ahead” – and from her time at Luther – “work hard, play hard. It’s always worked for me,” she says.

Nancy recalls with great fondness her high school days at LCHS, citing “being involved in sports and enjoying working on LIT” as the memories that stand out the most for her. But the community, too, and the relationships she cultivated there also made a lasting impact on her: “I have always liked the close community of Luther, and that everyone cares. There are so many ways for students to get involved, and the activities are really aimed at bringing people together.”

Like so many of her fellow Luther alumni, the friendships formed within the walls of LCHS have lasted well beyond Nancy’s high school years. “I am still in close touch with my Luther friends. In fact, I am disappointed to have missed the 25th reunion, but did catch up through Facebook.” Her peers aren’t the only people she remains in contact with, however: “I am also in touch with my old Phys.Ed. teacher, Mr. Gerry Harris,” she says. “[He] always taught the students about teamwork, discipline, and the confidence to achieve great things. Every time I go back to Regina I try to stop by for a visit and we have great discussions about sports. I am so glad that we can always pick up where we left off.”

As the mother of an eleven-year-old who has just entered into grade 5, the approaching reality of high school is on Nancy’s mind and, given her positive experiences at LCHS, she says she has considered having her daughter walk the very high school halls that she did. “I would love for Ariana to go to Luther, and I think about that every so often though it is still years away.” Who knows, maybe if Ariana strolled through the same hallways as did her mother, Luther could present her with an opportunity that would be “the start of it all” for her, too.