“Fairy tales were my first love,” says Courtney Bates-Hardy (U’11). Like many children, fairy tales were a formative part of Courtney’s childhood; unlike many young girls her age, however, she wasn’t just watching the Disney movies. “I was also reading Grimms’ Fairy Tales,” says Courtney. 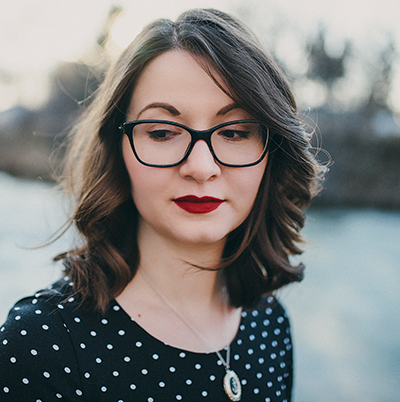 “When I was really young I came across Hans Christian Andersen’s The Little Mermaid, which has that horrible ending of her dissolving into sea foam and then becoming a spirit of the air and all of the blood and gore of having her legs split in two. So, I didn’t really have any illusions as far as what fairy tales were really about.” And she still doesn’t, as is evidenced by her debut collection of poetry, House of Mystery, which was published in the fall of 2016.

A reader from a very young age, Courtney recalls missing much of the scenery on family vacations because her eyes were focused on a novel. Many of these novels would serve as her introduction to poetry. “The Hobbit; Lord of the Rings; Anne of Green Gables: [they] romanticized poetry and that really encouraged me to seek out Romantic poetry in particular. I was always that weird kid going into the library looking for a book of Shelley poems.”

Courtney, now the Executive Director of the Saskatchewan Book Awards (SBA), has always been drawn to literature and the act of creative writing. “I’ve known that I wanted to be a writer for a really long time. I wrote my first poem when I was in grade one or grade two, I think.” Courtney continued to write throughout elementary and high school and was fortunate enough to do a writing retreat in high school. It was at this retreat that she learned how to submit written work to literary magazines. “I just kept sending stuff out – really horrible stuff – and getting rejected, of course.” Validation finally came, however, in 2009, while she was on an exchange program taking a creative writing class in Australia. Students of the class were asked to submit a piece of writing for an anthology that the school put out, and one of her submissions was accepted. And just like that, she was a published writer.

Back at home in Saskatchewan, Courtney, who graduated from Luther College at the University of Regina in 2011 with a Bachelor of Arts, Honours English, continued to write poetry throughout her undergraduate degree. She recalls taking an English class on fairy tales with University of Regina professor Nick Ruddick. “It all started coming back to me... all these fairy tales that I had read as a child. I found them really powerful.” As she began to write pieces for House of Mystery, she weaved different fairy tales throughout “to blend [them with] modern life [and] unpack and twist endings to the fairy tales that we know… to give them a new perspective.” Because part of her aim in House of Mystery is to “focus on [fairy tales’] connections to real life, [the poems are] not what you typically think of when you hear ‘fairy tale,’” says Courtney. “They’re not just princesses in pink dresses and beautiful castles and happily ever after with your prince. There’s also a lot of sadness, blood, starvation, and a lot of great stuff about motherhood and growing up and how to outwit bad people.” Much like what the feminist revival did for fairy tales in the seventies, Courtney wants to “remind people that, a lot of times, the women in these tales were very clever and revered for outwitting the trickster character.”

After completing her undergraduate degree, Courtney moved on to graduate studies and completed a master’s degree in English and Creative Writing at the University of Regina in 2014. While completing her thesis, she began working in Saskatchewan's publishing industry and really came to find a love for it. It was in this way that she ended up working as the Executive Director for the SBA, where she has now served for almost two years. The SBA is a non-profit organization that celebrates the authors and publishers in the province by holding an awards ceremony every year. They also host readings throughout the province to celebrate shortlisted and winning authors and publishers. SBA is currently accepting submissions for the 2017 awards, and Courtney and the Board have just started planning out the next awards ceremony. One of the highlights of her job? “Working with the authors in Saskatchewan has been fantastic. It’s a very tight-knit community and they are very supportive of each other, which is always awesome to see.” She also serves as a Board Member for the Saskatchewan Writers' Guild.

For Courtney, the immediate future involves a great deal of time promoting House of Mystery. Beyond that, there will be writing. Lots of writing. She has started working on some new poems, but says that it’s too early to know what they will shape up to be — though she does reveal that she is hoping for time to research monsters and monstrosity in general.

“Stop writing like a princess,” Courtney says with a laugh. These are the words that now retired Luther College at the University of Regina (LCUR) English professor Gerry Hill once scrawled across one of her assignments. “I think I was trying to write like Anne of Green Gables. He wanted me to go beyond that. His class was the reason that I switched from Pre-Journalism to English, and he was the first person who told me that I was a writer and I should keep at it. There were a lot of really encouraging moments from him.”

Along with continued encouragement and guidance, Courtney recalls that Gerry organized the first reading she ever did, which was for one of his creative writing classes. “I had never read my poetry out loud to an audience before. I was an undergrad at the time [and] I was super nervous. I’m pretty sure that those poems were terrible.”

With professors like Gerry, LCUR certainly played a positive role in her developing life as a writer, but in addition to helping her to recognize and develop her writing potential, she recalls other aspects of life at LUCR that helped her immensely in her undergraduate career: “Small class sizes. That helped me adjust in my first year or two. It doesn’t feel as impersonal as a larger university can. [And] there are a lot of professors who really care at Luther. That first year can be really lonely so it’s nice to know that there’s someone who actually knows if you’re showing up at their class or not and they want you to be there.”

LCUR prides itself on cultivating an environment where students are comfortable and encouraged to become the most successful versions of themselves, and Courtney’s experience at Luther and subsequent accomplishments certainly exemplify that.