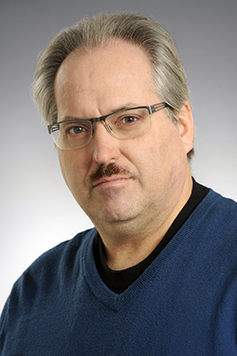 Dr. Noel Chevalier specialises in Eighteenth-Century literature, but his teaching and research interests cover a diverse range of topics, from literary responses to the Bible, to the cultural and economic roots of globalisation, to the treatment of science and scientists in literature, to Harry Potter, and, most recently, to literary representations of pirates. He co-edited a collection of essays on eighteenth-century poet Christopher Smart in 2013, and has presented work on pirates and pirate literature at conferences in the Netherlands, the US, England, and Canada.

Dr. Chevalier received an Inspiring Teaching Award in 1998, and helped create two Interdisciplinary programs at Luther College: the English/Science Learning Community, which has been running since 2000, and the IDS program focusing on Globalisation.

Dr. Chevalier is also passionate about music, history, film, travel, and cooking, and will eagerly—maybe too eagerly—discuss any combination of these topics at any time.

Reading Christopher Smart in the Twenty-First Century: “By Succession of Delight” Lewisburg, NY: Bucknell UP. 2013. (Edited with Min Wild).

“Breaking the Circle of the Sciences: Christopher Smart’s Lilliputian Magazine and Education.” “By Succession of Delight”: A Colloquium on the Words and Times of Christopher Smart. Plymouth, University of Plymouth, September 14-15, 2010.