Had you told Nathanael Bergbusch when he was a teen that he was going to be a biologist someday, he would have laughed: “It was my worst subject in high school.” Fortunately, he appreciated a challenge and was encouraged by Luther College teachers such as Dave Hall and Derek Frostad. 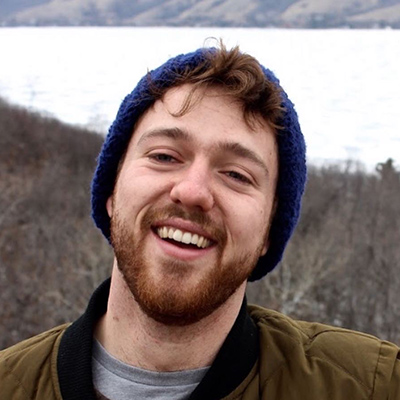 Luther’s engaging, interactive classrooms also helped. “In biology, we would go outside and do activities at Wascana Creek,” he remembers. “I’ve always been interested in the natural world and how living things work. There are a lot of crises in the world, such as climate change and environmental pollution. I wanted to understand the biology behind them and help make the world more sustainable.”

After graduating from high school in 2013 with Luther’s highest accolade, the Principal’s Gold Medal, Bergbusch went on to earn his BSc from Luther College in 2017, and his MSc from the University of Regina in 2020.

His master’s thesis, The Impact of a Nitrogen-Removal Wastewater Upgrade on Primary Producers in Phosphorous-rich Streams of the Northern Great Plains, focuses on the impact of Regina’s $158-million wastewater treatment plant upgrade on the water quality of Wascana Creek and the Qu’Appelle River. “Water quality is an issue that impacts us all. I find it fascinating what comes together to form this system – wastewater, agriculture, climate change – how do you manage that and improve the quality of water?” he asks.

When Bergbusch convocated with his graduate degree, he received the Governor General’s Academic Gold Medal for his exemplary scholarship, as well as a United Nations Sustainable Education Award and a University of Regina Service Award for his community involvement.

That community involvement began in high school, where he joined an Amnesty International club, which introduced him to the environmental justice movement. He says, “I feel I’m bringing the background I got from Luther into my PhD on environmental assessment and justice. We need to make sure water quality is good for everyone.”

Bergbusch is pursuing his doctorate in social and ecological sustainability at the University of Waterloo. “I’m looking at how to ensure good governance for communities living within or near watersheds, so they can make decisions – through environmental impact assessment – to make sure they’re benefitting,” he explains. “I’m learning about new concepts that are really important to me, such as ecological grief – how we mourn ecosystems and the fact that future generations won’t have the things we have. I want to make sure we are not a society that is grieving forest fires, water that’s contaminated, the things we love that keep us going.”

Another legacy of his time at Luther is Bergbusch’s interest in a wide variety of disciplines. “Luther is an amazing place because it challenges you in a number of subjects. Now that I’m doing more interdisciplinary and transdisciplinary work, I’m returning to those roots,” he says. He is passionate about making science more accessible to the public. In 2018, he spearheaded the University of Regina’s contribution to the annual Treaty 4 Gathering in Fort Qu’Appelle, where 700 kids came through their educational teepee. Bergbusch facilitated educational activities on freshwater science, organized speakers, and handed out wetland conservation native plants.

His scientific outreach can also be a bit unorthodox. In 2017, he used his background in improv theatre (which began at Luther under Chris Dueck) to serve as a host for Swamp Fest. The music festival takes place on Willow Island in Regina each summer and features the mascot T.A.B., or Toxic Algae Blob, a nod to the notorious water issues in Wascana Lake. Bergbusch took the opportunity to make jokes about how the water quality is a monster in some ways and to talk about how to fix it together. “It was fun to be part of that festival,” he says.

In his academic life, Bergbusch has published in multiple freshwater biology, oceanography and limnology journals and has spoken at national and international conferences. In 2019, he presented his master’s research at the Association for Limnologists and Oceanography (ASLO) conference in Puerto Rico, where he also participated in the community’s rebuilding efforts in the wake of the devastation caused by Hurricanes Irma and Maria.

After he completes his PhD, Bergbusch hopes to work with the Canadian Water Agency, the United Nations, and Environment and Climate Change Canada. He is also interested in teaching and research program development and working with non-government organizations and Indigenous Nations.

“Luther really pushed me to learn and work hard. That drive is what stuck with me,” he says. “It pushed me to see how I can help society on a larger scale and what my role could be.”