When Makenzie Morgan (HS’02, U’06) was just seven years old and folding laundry with her family in front of the TV, she witnessed an opera special on PBS that literally changed the course of her life. 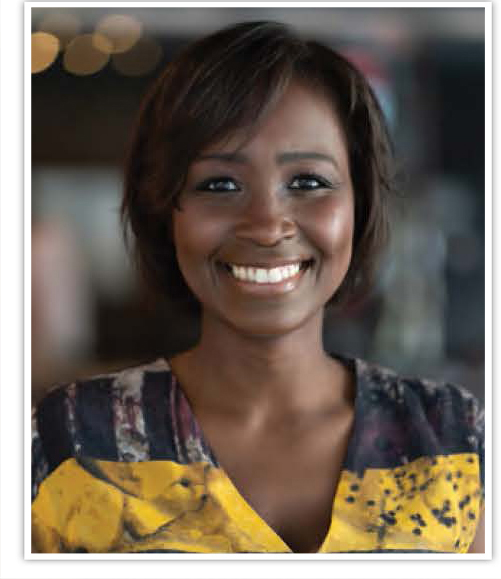 “I remember the late African American soprano Jessye Norman was singing a concert of German Lieder [songs sung in German]. Her voice was absolutely flawless,” Makenzie gushes. “It was the first time I ever saw representation in the arts, and it literally changed me. It didn’t matter that she was singing in a language I couldn’t understand. She was strong and black and beautiful. I knew right then and there that I wanted to be like her someday.”

Within a matter of weeks, Makenzie began voice lessons with teacher Diana Woolrich, one of the top vocal coaches in the province. The determined and gifted young dynamo also wound up taking German classes in preparation for her own entry into the classical arts.

“While my older sister and cousins attended Luther, I was actually scheduled to attend my feeder school at Winston Knoll, but a twist of fate resulted in my being able to go to Luther as well. It was life-changing. Here was a school where inclusiveness and cultural representation were at the heart of their core values. My classmates were from all over the world and brought with them amazing global perspectives. I honestly didn’t realize how lucky I was until later on in life. My choral teachers, Gail Fry and Dr. Carl Cherland, were also very inspirational.”

When Makenzie graduated, she decided to obtain her Music Education degree at Luther College at the U of R. “While performance was a big part of my life, I knew that teaching and sharing my love of the arts would also be part of my story.” She took a post-secondary Artist Diploma at the University of Western Ontario and stayed an additional two years to pursue her master’s degree in Music Literature and Performance with a focus in Voice.

But her world took a dramatic turn, forcing her to find the strength within to survive. “I was preparing for my final dissertation recital when I had to call my roommate because I couldn’t breathe. She insisted we go to the hospital, which ultimately saved my life. The doctors discovered a pulmonary embolism in my lung that would have killed me by morning.” Over the next few months other serious health issues were uncovered as well. Sick, exhausted and utterly broken, Makenzie lost her golden voice. She was on vocal rest for months and was unable to sing for a complete year. Her world went dark.

“It was incredibly difficult. I had back-to-back pneumonia and my mother and sister had to pack me up and drive me back to Regina. It was devastating. I learned that the voice is a very delicate, sensitive instrument and it absorbs all of life’s stressors. It was a very personal, traumatic and emotional process to work through,” she recalls, taking a moment to collect herself. “I had to learn to adjust and pivot.”

As she slowly began to heal, Makenzie ended up working for the Saskatchewan Choral Federation and taking on a few short-term contracts teaching music and drama with the Regina Public School Board. “Those years taught me that there were alternatives to remaining in the arts, even if I wasn’t singing.”

Two years later, Makenzie applied for a teaching position at a private school in Ontario and eventually moved on to redesigning curriculum and building music programs for two arts high schools with York Region District School Board. “These combined experiences laid the groundwork for what I currently do in Curriculum Design, and Learning and Development,” she enthuses. Today, Makenzie works for the Canadian Opera Company as the Interim Manager of Organizational Partnerships and Programs. “Luther had a major part in cultivating my passion. My ‘why’ is driven by a culmination of all of these creative forces.”

As her metamorphosis took hold in Toronto, she also found her voice —both literally and figuratively— thanks to renowned voice teacher Mark Daboll, who is responsible for the reconstruction and rehabilitation of her sound. “The person I was before is no longer,” she acknowledges. “I had to find my new voice and, ultimately, a new sound. It took me three years to feel physically able to sing, but Mark built back and strengthened my voice. I’m still a soprano, but my sound is warmer, fuller and more mature now.”

In addition to her curriculum design work, Makenzie still finds time to perform with orchestras and chamber choirs. A full-circle turning point occurred in 2017 when she took to the stage for the first time since overcoming her health issues and sang “Rejoice Greatly” from Handel’s Messiah with full orchestra. “It was an incredible moment and it triggered many emotions. That was the last oratorio I sang prior to becoming ill, and here I was, not only able to sing again, but sing even better.”

Makenzie continues to navigate the many facets of her career. But one thing is certain: “Singing is the gas that fuels my creativity for telling stories through sound. That inspiration, that source, has never changed for me, and for that, I am forever grateful.”