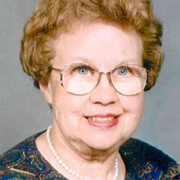 Amber MacLeod began her most recent annual Christmas letter with the words, “I’m grateful, thankful, and blessed.” She began thinking about the many things she is grateful for, and her time at Luther College High School, where she attended grade 11 in 1945-46, is on the list. “My year at Luther provided the experiences and education that helped make me the person I am today,” she says.

MacLeod was born in the town of Antler in southern Saskatchewan. Her mother was Lutheran, but there was no church nearby, so the family saved and made sacrifices to send her to Luther College High School. Going from a small town to the city was a bit of a culture shock. She was lonely when she first moved into the Luther dorms but soon cultivated wonderful, lifelong friendships there.

Her year at Luther left an impression that has lasted almost eight decades—MacLeod is now 93. “Coming from a very small school and a small town, Luther opened up a new world for me and made my perspective different,” she says.

The study skills she learned through the nightly study hours made her a stronger student when she went on to grade 12 at the Forget Convent and then to the Moose Jaw Teachers’ College.

She was also confirmed at Christ Lutheran Church the year she attended Luther College, which made her mother very pleased.

After getting her teaching certificate, MacLeod taught in schools in Kisbey, Arcola, Regina and Saskatoon for 13 years. “My mother said I always wanted to be a teacher. From the time I started school, I would line up all the chairs at home and pretend I was the teacher,” she laughs. “I feel I chose the right profession, because I loved it so much.”

Amber married Ken MacLeod and had three children, whom she stayed home to raise for 12 years. She then went to the University of Regina, where she earned a Bachelor of Education (1979) and two post-graduate diplomas: curriculum instruction (1981) and education administration (1984). “I started taking classes, and it was so much fun learning that I just kept going!” she says. Afterwards, she became a reading specialist with Regina Public Schools for 25 years. Upon retirement, she worked at the Leader-Post for four years in their Newspaper and Education Department.

It was at Luther that MacLeod discovered her love of sports. “I had never seen a game of football before, and we had the Luther Lions,” she says. Three decades later, she became the first female Committee Chair on the Board of Directors of the Saskatchewan Roughriders. As Chair of the Fan Appreciation Committee for almost 17 years, she spearheaded successful fundraisers, such as the Touchdown Cooking cookbook, which raised $66,000 in its first year.

MacLeod was an active volunteer in the community, programming for the Parkinson Society and lecturing for the Arthritis Association. “I learned public speaking at Luther and for the rest of my life, I’ve been public speaking,” she says. She has also served as superintendent for the Sunday school at Wesley United Church, on the Regina Women’s Bonspiel Committee, and as president of the Regina Women’s Canadian Club and the ladies’ sections of the Royal Regina Golf Club and the Par 3 Golf Club. “I always end up as President,” she laughs. In honour of her volunteer work, she was awarded the Saskatchewan Centennial Medal. She also received the Award of Merit from Regina Superannuated Teachers and the Queen Elizabeth II Jubilee Medal, and has life memberships in the Order of the Eastern Star, the Canadian Club, the Saskatchewan Reading Council and the Saskatchewan Superannuated Teachers.