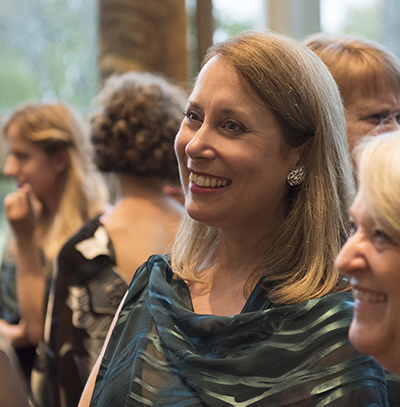 It was a given that Corinne Norbraten (HS’78, U’81) would attend Luther College. “My parents are both alumni. I just assumed I would have the privilege of going. That was how it was put forward to my brothers and I: ‘Isn’t it exciting? As soon as you’re old enough, you can go to Luther!’” she says. “Luther is our school just like the Riders are still my team. I’ve switched provinces several times but still wear green and white.”

Norbraten’s first memory of the high school is a fond one – attending the opening night of its first-ever musical, Oliver. “There was a live orchestra and it was mesmerizing to watch my 14-year-old brother [Garth] and his friends on stage, looking so professional. I thought, ‘I hope I get to do that one day.’”

She did go on to be involved in every musical presented during her time at Luther, and she also sang in the school’s choirs. That experience serves her well today as a member of the acclaimed Elektra Women’s Choir in Vancouver, where she now lives. Norbraten is in her twenty-first season with the choir, which has travelled and performed internationally. “We weren’t on the marquee at Carnegie Hall, but we were invited to sing there, which was wonderful,” she says. “My Luther music background was the preparation for so many opportunities.”

Her other activities at the high school included serving as head of the cheerleading squads and secretary of the student representative council, as well as being elected Miss Luther Lion in 1978. “It’s fun to open a yearbook and find pictures of my 16-year-old self with braids, wearing black-and-gold plaid,” she says.

After high school, Norbraten went on to get her BA in fine art from Luther College at the University of Regina, a choice that opened doors for her. She is currently sales manager and partner for Ayrtight Clothing in Vancouver. While attending university, she worked for the Hudson Bay Company and, afterward, her degree enabled her to enter their executive training program, which launched her career in the fashion industry. Her degree, plus 30 years of experience, also led to her teaching as a sessional faculty member at Wilson School of Design at Kwantlen Polytechnic University.

In 1999, Norbraten’s maternal grandmother passed away. She had been a teacher in a one-room schoolhouse who valued education greatly, so it made sense to donate to Luther in her memory. Norbraten started her monthly giving with $25 a month.

Why support Luther and not some other educational institution? “It is the school that my family has such affection for. I realize, in hindsight, how many things I was able to try, advantages of being part of a smaller student body,” she says. “I wouldn’t have considered supporting a different educational institution. Luther is special.”

In addition to being a consistent, long-term donor, Norbraten maintains her connection to the school by helping to arrange alumni events in Vancouver. Whenever she meets another Luther grad, she feels an affinity. “The Luther connection doesn’t know borders; it’s enough to have gone to the school to create something in common.” Norbraten travels to Regina regularly to visit family and friends, always trying to plan a trip to align with the high school’s Luther Invitational Basketball Tournament (LIT). “Sitting in the stands, feeling the same school spirit, and seeing so many others who have also come back brings such good memories.”

Norbraten’s philanthropy stems from her upbringing as well. “I remember a foundation of the church I grew up in, that we are invited to give of ourselves, our time, and our possessions. Over the years, my monthly donation amount has varied. Sometimes I’ve been able to give more, but sometimes it was my time that was more abundant, and I could help organize an event. Sometimes I’ve been able to be an ambassador, perhaps inspiring someone else to be supportive,” she notes. “Life goes up and down, but over 22 years, even small contributions add up.”