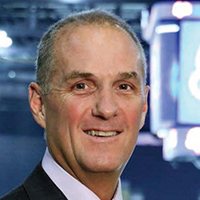 The Regina Pats are basking in the spotlight these days, as 15-year-old phenom Connor Bedard lights up the scoreboard and garners international press. The Pats’ Chief Operating Officer, Stacey Cattell (HS’84), beams with fatherly pride.

“All of our kids are special, but Connor Bedard has the star potential of a Connor McDavid [the Edmonton Oilers’ 24-year-old superstar captain]. Our Connor is just like his NHL namesake—quiet, humble, extremely talented. The other night, he snapped a wrist shot into the net so fast the goalie didn’t even have a chance to move,” Stacey boasts.

The Regina Pats and the rest of the Western Hockey League are enjoying a rare late-season spurt of activity during COVID-19 thanks to the organizational finesse of Pats COO and Luther alum Stacey Cattell, who lives by the motto: “If I have the opportunity to do, I always do!”

Stacey took a leadership role on a WHL committee in mid-2020 that helped develop a Return-to-Play protocol for teams in the WHL.

“Back in December, it became evident that we needed to create a new plan to gain the approval of our health authority and officials. Collectively, with a number of partners within the City and the league, we developed the ‘Hub’ concept, where seven teams from Manitoba and Saskatchewan would live in one socially-distanced complex, and play in one arena, abiding by COVID safety measures,” he explains. As a former Luther Board Chair (2011-2015), Stacey was instrumental in overseeing extensive renovations to Luther’s student dorms on the University of Regina campus. There was no doubt in his mind that a hockey Hub could exist on campus, with the Pats joining the Brandon Wheat Kings, Moose Jaw Warriors, Prince Albert Raiders, Saskatoon Blades, Swift Current Broncos, and Winnipeg ICE, all living in one location and playing at the Brandt Centre at Evraz Place.

“It took a lot of coordination, but there was no doubt in my mind that the Pats would stay in the Luther dorms,” he smiles. “The teams each played 24 games while living in the Hub. There was limited to no interaction with anyone not in the Hub—including me—to ensure kids and coaches are kept safe. The games are livestreamed at https://watch.chl.ca/whl.”

Stacey’s enthusiasm is infectious. It’s easy to see how he made his mark in upper management at Rawlco Radio for 14 years prior to joining the Pats, and as Director of Corporate Development for the Saskatchewan Roughriders in the seven seasons he worked for that organization. Stacey jokingly says he got his start in marketing and sales in the early 80s, running the concession stand at the Luther Invitational Tournament, the longest-running high school basketball tournament in Canada, fully run by students. “Every student has an opportunity to shine,” he enthuses. “We all learned responsibility and accountability from our time with L.I.T.”

In February of 1981, Stacey’s dad was involved in a catastrophic workplace accident that had him off work for three years. “It was challenging for our family. I remember how Gerry Harris stepped in and had the Winnipeg Lancer basketball coach adopt me for the weekend because of all of the trauma going on at home. I will never forget the sense of love that was extended to me by Luther. I’m really fortunate that I was influenced by the Luther community…,” he begins, his voice cracking with emotion. “I have a great life, and it’s up to me to give something back. I remember my math teacher, Barb Wright, telling me that I would likely have to repeat her class just as I was about to write an exam. She told me: ‘Good marks come with hard work, not personality.’ That stuck with me. I wasn’t the brightest student and was part of a ragtag group of guys (who, by the way, still get together annually nearly 40 years on). But in that moment, I realized that if I’m ever going to accomplish anything in life, I had better work hard for it.”

And work hard he has. Stacey has enjoyed leadership roles across the private sector, as well as eight years on the Luther Board (2007-2015), helping to create a 30-year vision for the High School, which included extensive renovations to the gym. But it’s the little things that stand out the most for Stacey. “Luther instilled a sense of loyalty and duty in us. When our teacher Mark Winkler came down with cancer, I came back to coach his soccer team. My daughter Hayley (HS’09, U’16) went back and coached high school volleyball for a few years. Luther holds a special place in both of our lives.”

Stacey believes that without the grounding he received at Luther, he wouldn’t be where he is today, helping to foster the dreams of a new generation of youth like hockey great Connor Bedard. “I love my job and can’t wait to see where we end up at the end of this shortened season!”