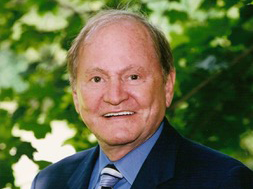 A transformative force in the field of medicine and a generous supporter of Luther College, the now retired Dr. Niels Lloyd Carlsen (HS’50, HSU’51) remains as humble as ever, still referring to his younger self – with a laugh – as “an old farm boy.”

The farm life that so defined his boyhood was not destined to be his future. His pastor, Pastor Johansen, encouraged young Lloyd’s parents and grandparents to send him to Luther College High School in Regina, Saskatchewan. “[He] said to them, ‘he has to go. He has a good mind and you can’t let him stay on the farm,’” Lloyd recalls. And so, after completing grade 11 at Redvers High School, the 19-year-old moved to Regina and into the LCHS dorms for his senior year. Thinking back to how he felt during those first few days at Luther, Lloyd recalls an immediate sense of comfort and belonging: “I felt they were going to take care of me. As an old farm boy… that was a good feeling.”

After graduating from LCHS in 1950, Lloyd attended Luther College’s University campus before relocating to Kingston, Ontario, where he attended Queen’s University. After graduating from Medicine in 1957, he embarked on extensive and varied postgraduate training, which took him across Canada, to New York City, and even overseas to the University of Glasgow and to London, England. After passing the Fellowship exam of the Royal College in Plastic Surgery in 1963, he quickly became one of the busiest and most respected plastic surgeons in Toronto, Ontario, joining the staff of the Scarborough General Hospital in 1964 as Chief of Plastic Surgery. He was promoted to Chief of Surgery in 1975.

An innovative surgeon, Dr. Carlsen was continually conceiving of new surgical techniques and was, on many occasions, the first surgeon in Canada to perform a new procedure (e.g., he was first in Canada to use pig skin as a temporary graft on burn patients). His dedication to his craft, to the hospital for which he worked, and to the patients for whom he cared was always apparent. In 1967 he established – and contributed the majority of the financial support for – the first Burn Unit in Canada, setting the standard for future hospital Burn Units.

Additionally, it was Dr. Carlsen who met with government officials to introduce the concept of day surgery, which resulted not only in cost savings, but also a reduced risk of post-surgery complications, as patients recover more quickly in the comfort of their own homes after undergoing minor and uncomplicated surgeries. “Unnecessary hospital stays are prevented,” says Dr. Carlsen, who refers to the now commonplace practice of day surgery as “the greatest contribution” he gave.

Dr. Carlsen is a brilliant and worldly surgeon, passionate about giving back to his community, and his generous support of Luther College is telling: clearly, in Luther, he sees an organization that makes an impact on the lives of its students. And, why shouldn't he? It certainly had an impact on him.

“[Luther] is a school that has a totally encompassing attitude toward students. They take care of [students’] well-being; they teach you and try to direct you into your future and that’s very important. Some [new students] come there and are frightened, [but] there’s a compassion and caring that goes on at Luther that makes you calm and leads you on.” Dr. Carlsen recalls being “a very nervous, shy individual” when he arrived at Luther. “Rex Schneider helped me a lot,” he reflects. “That was very beneficial.”

Clearly, given the impressive life and innumerable successes Dr. Carlsen has had, that “nervous, shy” youth was encouraged to push his own limits in a way that changed his life. And that, he says, is ultimately why he is proud to be such a generous supporter of the College: “[In medical school], I always thought back to the days at Luther. I felt, if there’s another farm boy like me who could benefit, then it would be worth supporting.”

His medical career presented many unique opportunities, which he always took on with zeal. He travelled on multiple occasions to Vietnam during the Vietnam War, and afterwards, to train Vietnamese general surgeons to conduct reconstructive plastic surgery on wounded soldiers. In 1971 he opened his own clinic for Cosmetic Surgery, believed to be the first of its kind in North America, and not long after, in 1976, he opened an offshore cosmetic surgery clinic in the Cayman Islands in response to a desire he perceived in many of his patients for privacy from friends and family immediately following an aesthetic cosmetic procedure. His gratitude to the Cayman government for allowing him to open his clinic there led him to provide twenty-six years of free surgeries in their hospitals, travelling there at his own expense and doing much work in the Burn Unit – an act for which the Cayman government awarded him Cayman status. These are just a few of Dr. Carlsen’s many outstanding accomplishments.

His innovation, contributions to the medical community, and commitment to patient care were recognized on many occasions over the course of his impressive medical career: he received a citation from the President of South Vietnam in 1974, was the recipient of the Canadian Commemorative Medal from the Governor General of Canada in 1992, was inducted into the Scarborough Walk of Fame in 2006, and received the Distinguished Service Award, presented by the Canadian Society of Aesthetic Plastic Surgery in 2001, and the Lifetime Achievement Award, presented by the Canadian Society of Plastic Surgeons