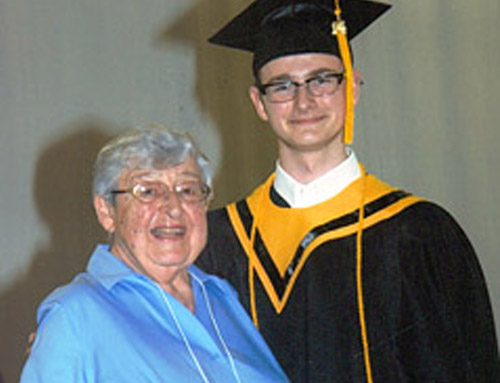 Lilie (Wittrock) Farley (HS’52) is a warm-hearted and practical person who takes a caring approach to life. Growing up on a small farm close to Regina, Saskatchewan and born in the middle of the Great Depression, she never felt she was poor in any way. Looking back, she realizes their family had few resources, but her parents were hard workers and thankful for what they had. She learned from their example to be appreciative of life and the good things that come your way.

One of those good things was the education she received at Luther College. Her parents made many sacrifices to enable her and her older sister Olga (Wittrock) Schmeling (HS’47) to attend Luther. Lil (as she prefers to be called) says confidently, “I was very pleased with the education I received at Luther. I appreciated that I had the opportunity to complete my high school education at Luther – many others did not have that. I am sure that my time at Luther helped me to become what I did.”  She also expresses heartfelt thanks for the lifelong friends she made while attending Luther.

After graduating from Luther College High School in 1952, Lil went on to study nursing at the Regina General Hospital School of Nursing. Three years later she graduated and she went straight to work as a nurse at the General. Later she moved to Chilliwack, British Columbia. and worked as a nurse there for about a year and a half before returning to Regina. In 1961, she made a temporary move to Washington, D.C. and remembers that her experiences there expanded her horizons and understanding of human nature. Never afraid to pursue a goal, from there she attended the University of Toronto to take Nursing Administration. Upon graduating from that course she came back to Regina General and became Head Nurse on a surgical unit.

Lil got married in 1964 to a farmer and decided that activities on the farm needed her help. But her nursing career called her back in 1968 when she went back to work with students for a short period of time. She absolutely loved her work with students – she loved helping them learn and mentoring those who needed a little extra boost to help them along. In 1981, Lil took a refresher course and went back to general nursing duty on a casual basis.  Lil and her late husband Bill had three children: Rhonda (HS’86, U’00), James (HS’88, U’92), and Lesley. Today Lil still lives on their family farmstead west of Regina.

An avid supporter of Luther in many ways, she likes to attend as many Luther events as she can – the class reunions are a favourite. Lil and her sister attended the 100th Anniversary celebrations and thoroughly enjoyed connecting with other alumni they hadn’t seen in some time.

Lil likes people. She liked what she did throughout her career; she gained much satisfaction helping others and teaching. It is no surprise, then, that she made it her mission to create a scholarship for Luther College High School grads who enter post-secondary education in health sciences. Only just recently fashioned, the scholarship fund will pay tribute to her parents and will be awarded annually; the first recipient may be chosen as early as this coming June. What a wonderful legacy she has formed to honour the Wittrock-Farley families.

Matt Milne (HS'14) was the very first recipient of the Farley Scholarship and is in the photo with her above. The photo was taken at Grad in June 2014.