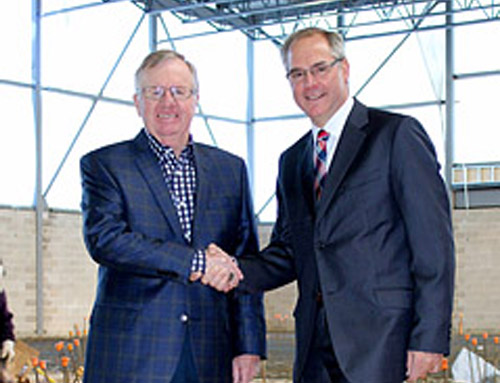 “Shaun and I are pleased to provide $1,750,000 in financial support to Luther College through the Brandt ‘Thanks A Billion Program.’‎ The Semple Family have had a long-standing relationship with Luther College beginning in 1959 when I attended the college as a dorm student. Since then, eight other members of the Semple family have benefited from the quality education provided by Luther College,”said Gavin Semple (HS’63).

“The connection with Luther College and the ‘Thanks A Billion Program’ is an excellent fit,” says Semple. "Both Luther College and the Brandt Group of Companies have strong roots in Saskatchewan and a shared vision for the community and our youth.” In 2004, Semple was the campaign lead on the former Luther College High School gymnasium project that led to the larger renewal and expansion initiative. “Gavin’s continued support and commitment to the gymnasium was pivotal in moving us forward on this larger project and campaign,”says Hillis.

The new gymnasium will be named The Semple Gymnasium and will have seating capacity for one thousand fans. This will allow Luther to host provincial and national tournaments in many sports, including badminton, volleyball and basketball and increase the size of their annual volleyball tournament from eight teams to sixteen.