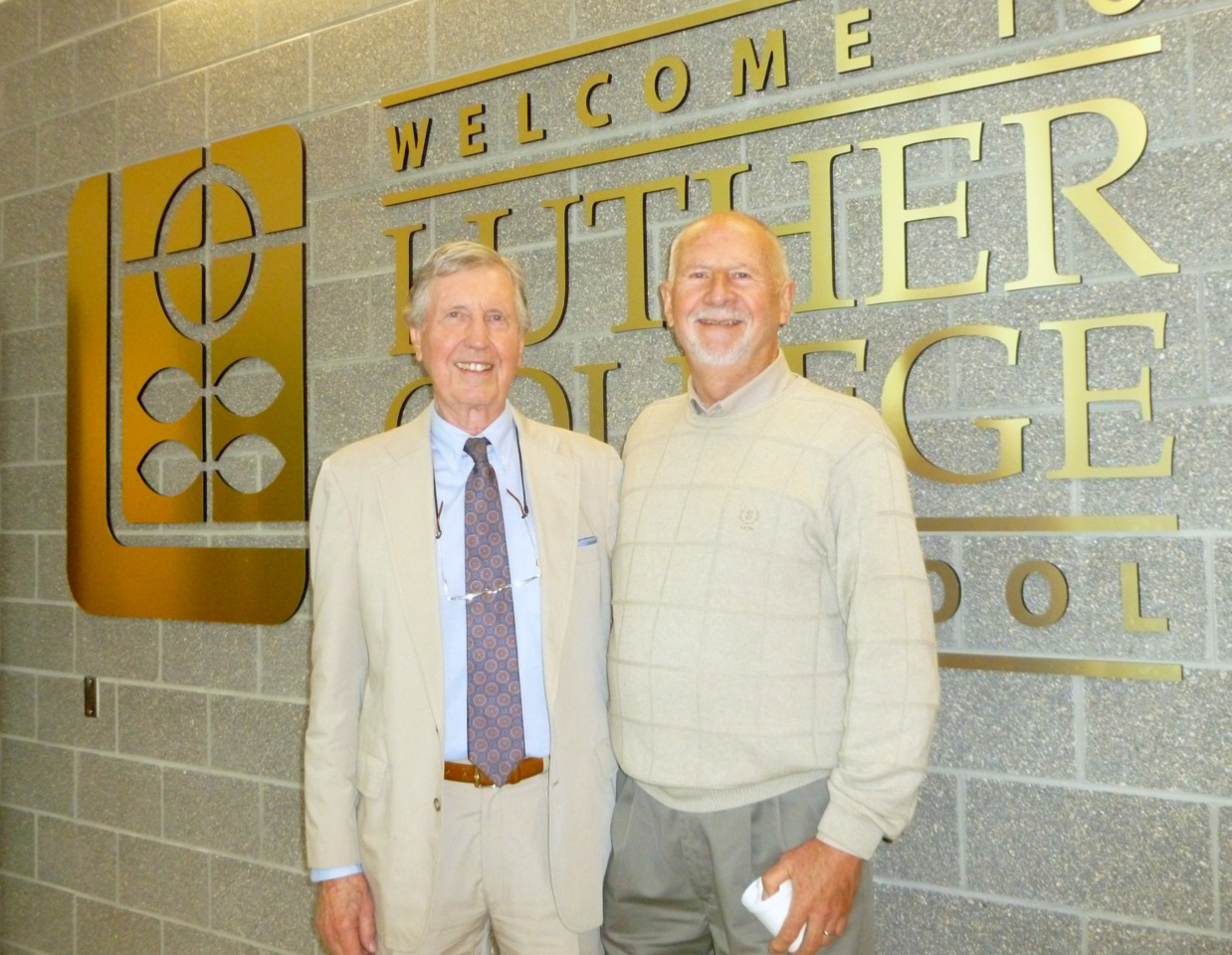 Community is a foundational element of Luther College. It is a defining characteristic brought into existence by generation after generation of incredible individuals and their families: students, alumni, faculty and staff. John Persson (HS’61) is a perfect example.

John and his family are a core part of the Luther community, weaving in and out of every facet of Luther life. John was a student at the High School, attending from 1957 to 1961. In addition to academics, playing basketball as a Luther Lion was an important part of his life. After graduating, John — along with many of his fellow Luther Lions — remained at the high school for an additional year to take university courses (mainly to remain together, John says), which were offered through the high school in those pre-university campus days. They continued to play basketball as a team for Luther University. “Being the smart alecks that we were, we named ourselves the Luther Vultures,” John recalls. “We thought we were pretty clever.” Little did he know that just over ten years later he would return, this time as a teacher.

John attended Canadian Bible College before heading to university in Regina and Saskatoon. He was two years into his Engineering degree when he realized that this was not where he was meant to be. What was he to do with all of the maths and sciences he had under his belt? Teach them, of course. He completed his first degree in 1967, married the love of his life, Wenda, and began his education degree, which he completed in 1969. After teaching for two years in Columbia, he returned to Regina at a perfect time. John’s old Chemistry teacher, Mr. Paul Liefeld, had just retired, and the high school was recruiting a new science teacher. Under Principal Morris Anderson (John’s basketball coach in his student days), John began his twenty-five year teaching career with Luther, remaining there until his retirement in 2000.

“It was a great place to teach,” John recalls. “Many of us were in the same stage of life — getting married, raising kids. We were really a family.” All three of John and Wenda’s children— Megan (HS’89), Derek (HS’91), and Nathan (HS’99) —attended Luther and took classes from their father—a practice not uncommon among Luther faculty. “It was exceptional not to have the kids of faculty go to Luther. Most teachers ended up teaching their own kids, but the atmosphere was very comfortable.” This parent-as-teacher paradigm continues to exist today, even in John’s own family: his son Derek currently teaches there, and Derek’s children, Kate and Will, are students. Following in his grandfather’s footsteps, Will is on the senior basketball team and wears number 14 — the same number his grandfather wore those many years ago.

John feels honoured to give back to the school that gave him and his family so much. “I support Luther for many reasons,” John says. “As per their motto, Luther does provide quality education in a Christian context. Luther’s higher academic standards put their students in good stead for future academic endeavours.”

But, for John, the decision to be a donor has always been deeply personal. “Luther gave me and my children a solid education; later, it gave myself and my son Derek a teaching position; now my grandchildren are getting a good education there. Looking back, I was blessed with a good experience at Luther both as a student and a teacher.”

As an alum and as a retired teacher, John has returned to this place of his youth many times: to graduations as a proud parent three times over (and soon as a grandparent, the same number of times), and to innumerable school functions. While the College is thankful to John for his consistent financial contributions, it is that long history and deep connection for which the College is most grateful.